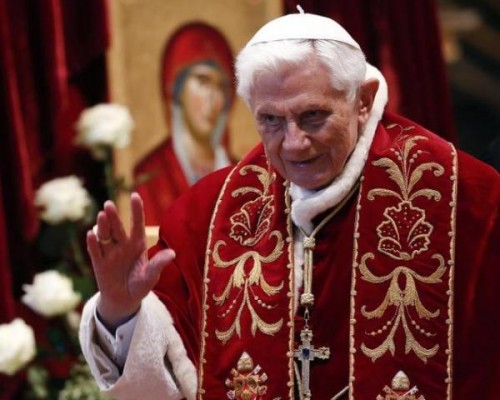 I am not a Christian, and have frequently taken issue with Pope Benedict XVI’s theological positions and historical interpretations, both in form and in content.

We met on two occasions: the first, while he was still Joseph Cardinal Ratzinger, the second, in Rome, when he was Pope, as a participant in interfaith dialogues.

I have read him closely, and listened to him carefully.

His knowledge, his intellectual rigor and the depth of his analyses made a strong impression on me.

Behind a face that often appeared cool and distant, and despite an introverted manner, he radiated goodness and gentleness.

He was surprising in the most contradictory way. Despite our deep disagreements, I always respected the man, his intelligence, his generosity and obvious courage.

He was never afraid to state what he thought was just, to challenge his opponents or the majority view.

As Pope, he often seemed out of touch, his thought much deeper, darker—that of a theologian—than the visionary and hope-filled message of we normally associate with his position as a Pope.

Today, recognizant of his age and responsibilities, he has stepped down.

The difficult last years of his predecessor must have been on his mind.

His decision must be saluted.

As a lesson rich with multiple messages for both the Church, and for the world at large: know your limits; take leave of power by choice and not by fate’s decree.

Will the Church hear the departing Pope’s message and call to the summit of power younger figures with the same knowledge, the same intellectual rigor?

Will world leaders, men and women alike, grasp that above and beyond the question of age, what is ultimately at stake is humility?

Can we recognize that we are no longer able to fulfill our commitments; can we learn to take our leave, to turn our back on power?

The lesson is valid for everyone, religious or not; for agnostics and atheists, for Hindus, Buddhists, Christians, Jews and Muslims.

For we are never aware enough of our limitations, never humble enough.

The best measure of a successful life is the way we turn away, we renounce, and even by the way we depart it.