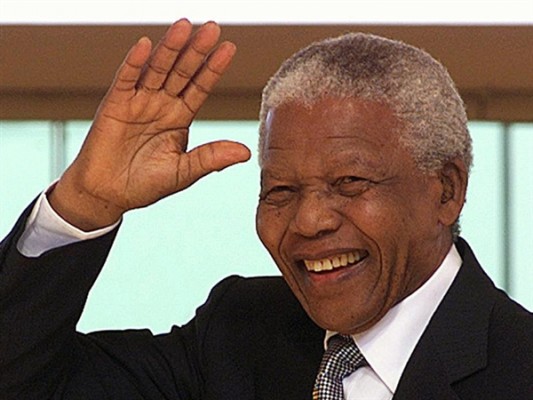 (December 6, 2013) – As we collectively mourn Nelson Mandela’s passing, it is fitting to reflect on his life, and celebrate his greatness as a leader, and a man. His passing is a loss for our planet, but his spirit will live on in the fabric of the world, and in all of us.

At the age of 44, Mandela was imprisoned in a 6 x 9 foot cell on Robben Island by the apartheid regime. He was 71 when he was released on February 2, 1990, and I waited all day with 80,000 other people in the hot sun in Cape Town’s city square. Suddenly, there he was; a tall, strong, smiling, laughing Xhosa man with eyes dancing. We shouted and sang and danced our adulation and love. He dazzled us with his vision of a future where all South Africans, black and white, would live equally in their homeland. His warmth and spirit settled in us, seeping into our hearts and bones. The firebrand had come home to his wise elder self, and now he was going to take the rest of us home to the “new South Africa” with him.

As much of North Africa and the Middle East continue to push through the growing pains of the Arab Awakening – including interethnic violence and challenges in governance – Mandela’s truly uncontainable spirit and leadership style can perhaps help light the path forward for other nations, and for all of us.

He embodied the core elements of great leadership, even as he remained fully human with flaws and shadows. And he illustrated a profound truth, that we are great not despite our failings, but including them. We cannot pretend to be someone other than who we are, and much of the controlling, rigid leadership we see in the world today is armour against fear of personal failure and weakness. His authenticity taught us; he was always himself. Despite his hot temper, he was compassionate and empathetic towards those who imprisoned him, even as he lamented his inability to have a good relationship with some of his family.

He was a leader for all South Africans – never swerving from his vision of a rainbow nation – and a courageous problem solver, with pragmatism built on core values that translated into a deeply held personal and professional ethical framework. His inspiration came from a purpose bigger than himself and his presence, voice and discipline inspired others to be better than they ever imagined.

Who he was as a leader at this time of global upheaval matters. As old certainties are uprooted, the challenge is how to create a new world for the benefit of all, not just for “my” group or faction or party. He showed us not only what to do and how to do it, but also who we need to be as leaders – and citizens.

I was recently in Libya, where people hunger for a leader able to unite Libyans through their common humanity. A local leader in Sirte told me wistfully that Mandela had been South Africa’s secret ingredient, and he wished they had one too.

Next door in Egypt, people also long for a leader able to save the country from violence and continuing division. And Syrians hope for a peaceful solution that will unite the nation.

As we consider Mandela’s life and legacy, we might ponder his favourite poem, Invictus, by Victorian poet William Ernest Henley, and the lines that he said sustained him during 27 years in prison:

I am the master of my fate: I am the captain of my soul.

Mandela understood that life will throw many things at us, and it is up to us how we respond. He knew the power of forgiveness and took tea with Betsie Verwoerd, widow of Hendrik Verwoerd, the architect of apartheid. He learned that love is the greatest power in the universe, and invited his prison wardens to his inauguration as the first democratic President of South Africa. He taught us how to live with ourselves, and with each other, embracing our common humanity.

I am grateful to have been one of the thousands who stood in his shadow that day in 1990 when he came back to us, and showed us how to step into the new democratic future that, together, we would all create.

A version of this article was published by forbes.com earlier this year.

* Susan Collin Marks, Senior Vice President of Search for Common Ground, is an internationally respected peacebuilder, mediator and author from South Africa. Her book, Watching the Wind, chronicles her experiences during the transition from apartheid to democracy. This article was distributed by the Common Ground News Service (CGNews).