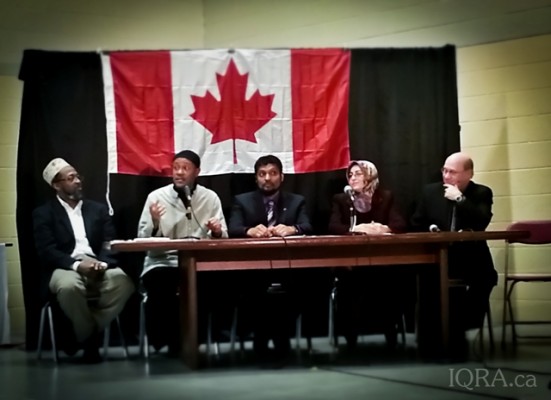 Have you ever wondered what goes on in prisons? Have you wondered who are the men and women that are incarcerated? Who are chaplains and volunteers who spend endless hours helping those who have lost their voices?

These questions were addressed at a chaplaincy awareness forum and dinner held on Saturday evening at the Islamic Institute of Toronto in Scarborough.

A chaplain provides religious and spiritual care to inmates in federal and provincial prisons and they play a key role in the rehabilitation of offenders.

“The challenge of all faith communities is to run chaplaincy services given the cuts in government funding,” said Imam Abdul Hai Patel, President of the Ontario Multifaith Council and the Canadian Council of Imam’s Interfaith Relations Director, in his welcoming remarks.

The evening’s program was held to offer support for the growing number of chaplaincy services such as those offered by the Ottawa-based Islam Care Centre which has been at the forefront of supporting chaplains in Ontario prisons.

The Centre provides two permanent Muslim Chaplains to all the federal penitentiaries in Ontario.

Working in partnership with Correctional Service Canada and the Ontario Multifaith Council, the Centre has fostered an environment that allows for prisoners to develop themselves while serving their sentences and then to reintegrate back into their community.

The Islam Care Centre (ICC) ensures that inmates receive a prayer mat and Qur’an, in a language of their choice, as well as access to other Islamic literature, and monitor that their religious rights are preserved. ICC also tries to ensure that inmates who are released can re integrate into society in an easy manner.

The evening’s program included speeches by chaplains from various faith communities, a panel discussion and a moving testimonial by Ahmed Habhab who was sent to prison after being convicted for drug trafficking.

“I was involved in ecstasy trafficking,” said Ahmed Habhab. “I thought I would never get caught.”

He was arrested and served a prison sentence but turned his life around while on bail.

Habhab talked about being ostracized by the community after being released and he had an advice for Muslims, “Be conscious of the day when you will stand before your Lord.”

A special message was delivered by Jim Karygiannis, the long-standing federal Liberal Member of Parliament for the Scarborough-Agincourt riding.

“You have to get involved and make a difference,” Jim Karygiannis told the audience. “Do something so that at the end of your life, your life would not be wasted.”

“We’ve to accept each other as equals,” he added. “There are four words I want you to remember – respect, accept, celebrate, embrace – [these words] make us part of the human race.”

In the panel discussion, chaplains discussed their work and how the community can provide support to incarcerated prisoners.

“Pay attention to the factors that lead to incarceration,” said Imam Michael AbdurRashid Taylor, Executive Director of the Islamic Chaplaincy Services Canada. “It is important for our community to be proactive rather than reactive.”

Reverend Harry Nigh, a Mennonite minister and Chaplain asked the audience to provide assistance to inmates once they leave prison.

“You hold the key to freedom for people coming out of prison,” said Reverend Harry Nigh.  “Community volunteers can make a difference by making men and women feel that they belong.”

Nigh is one of the founders of the Dismas Fellowship, a bi-monthly meeting that provides assistance to individuals who have recently been released from prison.

“You can judge the value of a community on how they deal with the marginalized, destitute, needy and poor,” said Dwyer.

For further Information on the chaplaincy program visit http://islamcare.ca/services/chaplaincy-services