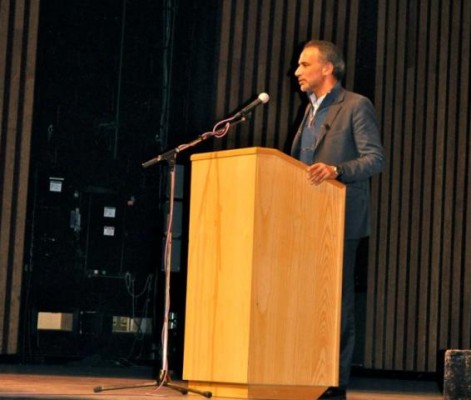 Tariq Ramadan, one of the leading scholars and public intellectuals in the Western world, lectured to packed audiences at Canadian Universities last week on the importance of a shared ethics, pluralism and civil engagement in today’s world.

“We can’t talk about anything to do with an ethical perspective if we don’t start talking about the concept of the human being,” Dr. Tariq Ramadan told a filled auditorium at the University of Toronto last week.

“The starting point for a shared ethics is to talk first about our concept of the human being.”

Professor Ramadan spoke at the University of Toronto on March 13, followed by lectures at Universities in London, Ontario on Thursday and Guelph and Waterloo on Friday.

He was invited to the University of Toronto by a number of departments where he spoke on the theme, ‘Towards a Shared Contemporary Applied Ethics: An Islamic Perspective.’

“All of us talk about the dignity of the human being, so this is the starting point,” he said.

“In a shared applied ethics we need to come to an understanding how can we protect the very essence of what is the human being.”

Professor Ramadan is widely considered to be the leading commentator today on Islam and its role in the West.

He is active at both the academic and grassroots level, lecturing extensively throughout the world on theology, ethics, social justice, ecology and interfaith, as well as, intercultural dialogue.

“In our interfaith dialogue we talk from the periphery of our traditions not from our centre,” he remarked.

“Our shared universality does not mean that we are forgetting where we are coming from – we are all coming from a particular background.

“It is natural for people coming from different backgrounds to think that their values are universal,” he added. “But the point is how do you talk about the universal, it’s important.”

Ramadan spoke at length about the importance of intellectual modesty and humility when searching for transcendental truth.

“In my book the ‘Quest for Meaning’, I am using the image of the metaphor of the mountain – there are many routes and that the top we can share,” he said.

“Because if you put yourself at the top, you are looking at the mountain from the sight of God,” he remarked.

“The only universal I know is the shared universal; it’s the top accepting there are many routes.”

The prominent Muslim scholar was invited the following day to London, Ontario by the Office of Campus Ministry at King’s University College as part of its Religious Life Lecture Series.

The lecture titled, ‘Believing in One Truth in a Pluralistic Society’, was co-sponsored by the college’s Council on Muslim, Jewish and Catholic Learning.

He told the packed auditorium in London, Ontario that a person’s actions should be consistent with whatever convictions and ethical beliefs they hold.

“You can be atheist or agnostic, it doesn’t matter,” he said.

“If you are consistent with your principles, you can’t be passive with what is happening in our society. It means to be active.”

“Show us how you are committed to your principles by working together for more justice.”

Professor Ramadan went on to tell the audience that a person should be committed to their beliefs and principles but these should not preclude them from listening and learning from people of other faiths.

“If God had willed it, he would have made you one community,” he said.

“But he is challenging you. It’s a competition for the good. The way you deal with your truth, what your truth is telling you about the others, it’s a necessity. They’re helping you to be better.”