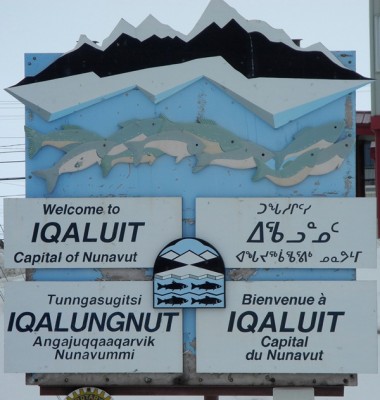 Seeking to fulfil their religious duties in the Northern Hemisphere, Muslims in the far-flung Canadian city of Iqaluit, close to the Arctic Circle, are looking to build their first mosque.

“We are a small community of about 80 to 100 Muslims,” Syed Asif Ali, President of the Islamic Society of Nunavut, told IQRA.ca.

“Iqaluit is the territorial capital of Nunavut and has a population of about 8,000 people.”

Nunavut is a vast territory in northern Canada that stretches across most of the Canadian Arctic and has a population of 33,000.

Eighty-five percent of the inhabitants of Nunavut are Inuit, an indigenous people of Canada.

“Most Muslims came here from the South for jobs,” says Ali.

“Many came in as taxi drivers hired by a company owned by a Muslim but most of them are educated so they eventually found a job with the government or with a private company.”

Canada is the world’s second largest country by area and is made up of ten provinces and three territories.

Nunavut, which makes up about 20 percent of Canada’s land mass, is one of the three territories, all of which are primarily north of 60 degree latitude.

There are no roads into Nunavut. Iqaluit is only accessible by aircraft and, subject to ice conditions, by boat.

The average winter temperature is around -30 Celsius and the only months with average temperatures above zero are June to September.

Iqaluit experiences 24 hours of daylight per day in June and early July, and six hours per day in December.

Muslims say the mosque would help them fulfil their religious duties in the Northern Hemisphere.

“We started off praying in one of the houses but over the last few years the number of Muslims increased,” says Ali.

“We decided after one Friday prayers in 2009 to establish the Islamic Society of Nunavut and we registered the organization with the government in October 2009.

“We have gone through many options such as buying a home and converting it to mosque but we have been in contact with city officials and they have identified a suitable land for a mosque,” added Ali.

“The lot is still going through a rezoning process and we are confident it will be approved.”

The Muslim community has been in contact with the Zubaidah Tallab Foundation, a Manitoba-based Islamic charity, which helped build the first mosque in the northern city of Inuvik in Canada’s Northwest Territories in 2010.

“They (the Zubaidah Tallab Foundation) agreed to send a prefab mosque and we inquired from local movers and we were told that there is not a big enough crane to take the prefab mosque from the barge or ship so this was not feasible,” says Ali.

“So they agreed to send the material and provide the contractor to build the mosque instead; our part is to arrange the lot and to get it serviced.”

The Iqaluit Muslim community still needs to raise approximately $200,000 to purchase the land and to get it serviced with water and electricity.

The Islamic Society of Nunavut is currently engaged in a fund-raising drive across the country to help build the mosque.

“I personally visited Iqaluit last May and found the possibility of an Islamic Center in the North one of most exciting projects that I’ve seen in years,” Dr Abdullah Hakim Quick, an international scholar, Da’wah worker and historian told IQRA.ca.

“Al-Hamdulillah, there are Inuit people who are embracing Islam and one brother has expressed the desire to translate the Qur’an into this important ancient language.”

For more information about Mosque project go to www.iqaluitmasjid.com