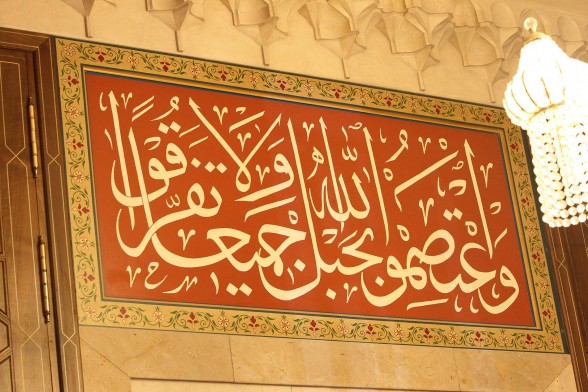 (September 14, 2013) – Muslims gathered at the recently concluded Islamic Society of North America’s (ISNA) Convention in Washington, D.C. enthusiastically welcomed the announcement of an agreement of mutual respect and unity between Sunni and Shi’a Muslims, reached between prominent leaders of the two groups.

“It was a very moving moment for the history of Islam in America,” said ISNA President, Imam Mohamed Magid. “ISNA is a platform for the unity of Muslims – whatever brings Muslim together strengthens all of them.”

The Islamic Society of North America (ISNA) celebrated its 50th Anniversary at its Annual Convention in Washington, D.C. over the Labor Day weekend.

Thousands of people, from all walks of life participated in the convention.

“I, personally as the moderator for the event, am very much thankful to ISNA and their hardworking staff and members,” said Imam Nahidian, Director of Manassas Mosque in Northern Virginia and a signatory to the agreement. “I believe due to the sincerity and love of so many volunteers, this successful event was achieved and no doubt, Allah’s help is with a gathering bringing Muslims together.”

The President of the United States, Barack Obama, and the Mayor of the District of Columbia, Vincent Gray, congratulated the Muslim American Community on the auspicious occasion.

In his video address, the President highlighted the many ways in which Muslim Americans and ISNA leadership are serving as an effective partner in promoting inter-religious initiatives in the United States and religious freedom for minorities around the world.

*Please see text of agreement below.

This declaration was made on the occasion of the thirteenth annual conference of the Council of Shi’a Muslim Scholars of North America entitled “Sectarian Violence: Its Origins, Results & Solutions,” which was held on the twenty-forth of the month of Shawal, 1434 A.H. – the first of September of 2013 – in the capital city of Washington D.C. In attendance were a group of religious scholars, intellectuals, academics, leaders, the imams of centers, the presidents and chairs of religious, Islamic and community organizations  of diverse Islamic sects. In this conference, discussions were held surrounding a number of important issues including the dire situation of unrest, destruction, genocide, and refugees that is being witnessed around the world and more specifically in the countries of Muslim populations, all a result of political agendas in the garb of religion and sectarianism. The conference attendees agreed upon a number of issues, decisions and agreements which with the support of Allah Almighty will protect the sanctities and the freedoms of mankind, bring people together, improve the security and safeguard coexistence.

We, the undersigned, with the guidance of the holy verse, “And hold steadfastly to the rope of Allah collectively and do not be separated,” and taking heed of the advice of the holy Prophet, his holy household and noble companions to the pilgrims of the sanctified house of Allah who said,”…For your blood and wealth are sacred to you as is the sanctity of this day in this month in this land of yours,” as well as his other statement, “The believer is the brother of another believer, together they are like a strong building, one supports the other.” Therefore, based on our religious and ethical responsibilities towards our religion, communities and nations, we announce the following:

1)    All Muslims are one nation, even if the schools of thought are diverse. Such diversity is a source of intellectual enrichment and should not be the cause of accusations of disbelief, murder, and the desecration of sanctities. For the main reason for the manufacture and escalation of what has been come to be known as “sectarian violence” is not holding steadfastly to the rope of Allah Almighty through holding onto the rightful leaders and the pious and insightful religious scholars, but instead following those who misinterpret the holy Qur’an and leave the authentic (Saheeh) traditions of the honorable Sunnah, hence passing false verdicts.

2)    It is forbidden by Islam to use unethical and unjustified methods of negative propaganda in the name of religion or school of thought, such as name-calling which fuel sectarian discontent leading to the persecution of others through acts of terrorism which include violence, the desecration of their sanctities, murder, rape and looting. For all of this is forbidden in Islam according to the Holy Qur’an and the Sunnah. Whoever does otherwise is guilty of inciting such atrocities.

3)    It is forbidden by Islam to support such acts financially, with weapons and with media coverage.

4)     It is forbidden to violate man’s rights, those things sanctified to him, and to indict others based on religious beliefs, sect, and thought. It is also forbidden to attack others by name-calling one Nasibi, or the other Rafidhi, or even Kafir, and so forth. For such judgments are Allah Almighty’s to make and no other. In Islam there is nothing more sanctified than life, family, and property. For Allah Almighty has graced mankind with dignity and has forbidden the slightest of offenses against it, both physically and emotionally.

5)    It is important to understand the role of religion in public life. The role of religious scholars is to spread knowledge, tolerance and brotherhood within society. This is the best method of creating a secure and peaceful coexistence within humanity. Religious scholars are expected to rise above the petty politics. Rather, they are expected to speak the truth, guide and admonish its politicians and workers. It is no one’s right, without exception, to make religion a servant to politics, personal agendas or the goals of its beneficiaries.

6)    It is important that Islamic organizations and centers be attentive to the youth by raising them and guiding them both religiously and intellectually to be pious, ethical, knowledgeable and moderate without negligence or excess. The youth must be shaped to love their countries, to coexist peacefully, to be tolerant of others by embracing an ethics of mutual respect and cooperation for the common good. This will ensure human brotherhood, which is not only in religion, but also in humanity. This in turn will safe-guard the nation, society and its future.

7)    Based on the necessity of cooperation, especially amongst the Muslim leaders and those in the position to make change because they are capable of bringing people together amicably, a supreme committee of leaders has been established for the purpose of providing advice, decision-making, and to take mutually-accepted stances to counter extremism or any situation that requires the reaction of religious scholars, and the clarification of their position towards the sanctities of Islam, Muslims and their interests. It has been agreed that the following organizations: I.S.N.A. (represented by Imam Sh. Mohammed Magid), I.M.A.M. (represented by Sayyid M. B. Kashmiri), The Fiqh Council of North America (represented by Dr. Shaykh Muzammil Siddiqi), Islamic Shia Ithna Ashari Jamaat of Toronto (represented by Sayyid Mohammed Rizvi), The Mufti of Washington D.C. (Shaykh Mohammed al-Hanouti), The al-Khoei Foundation (represented by Shaykh Fadhel al-Sahlani), and Zaytoona College (represented by Shaykh Hamza Yusuf will be members of this committee.

8)    This declaration will be sent to those religious scholars and intellectuals who are required to participate, but were unable to attend this conference, and would like to sign it because they would like the honor of contributing to the realization of its objectives. This declaration should be announced to the public.

In closing, the conference attendees ask Allah Almighty to support them in their service to Islam and Muslims, to establish security and peace and to bless this milestone that serves as a message of peace, tolerance, and content for all Muslims. We ask that it becomes a spring-board to forging the required relationships between all and may the peace, mercy and blessings of Allah be upon you.