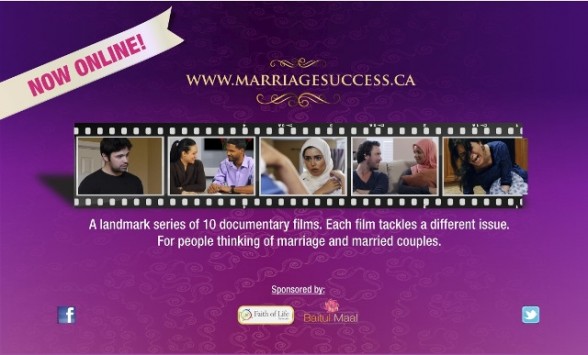 (July 12, 2013) – A landmark documentary series on marriage was released in North America this week at the start of the month of Ramadan.

“Divorce is on the rise in many communities and the traditional support structures that once sustained relationships are far fewer than before,” Jawad Jafry, the Producer-Director-Writer of the series told IQRA. ”Our objective was to create high quality content that could engage people effectively and help them easily access some essential strategies for a happy and successful marriage.”

The series titled ‘Marriage Success’ consists of 10 documentary films about getting married and staying married.

“We’ve produced content for people thinking of marriage, newly married couples as well as married couples,” said Jafry. “Our films will be available on the marriagesuccess.ca site in Ramadan as well as through our Facebook, Twitter and our YouTube Channel.”

The films are grouped into two broad categories: Before Marriage and After Marriage.

The Before Marriage films deal with 6 of the most common issues in the early stages of married life.

The After Marriage films focus on 4 “winning strategies” that couples can learn or reclaim at any point in their lives to improve their relationships.

Each film presents well-known Islamic scholars, social work professionals and dramatic artists and focuses on a single issue, how this problem can affect marital relationships and advice on how to overcome it.

The project has been sponsored by the Canadian-based charitable organizations, Faith of Life Network and Baitul Mal.

The films are meant to address the challenges facing married couples, according to Faith of Life Network President and Executive Producer of the series, Dr. Hamid Slimi.

“This project tackles some major destructive elements that could endanger marriages thereby it has great ramifications on the lives of married individuals, children, immediate relatives and the society at large,” Dr Slimi told IQRA. “We looked around and asked ourselves how important was a project like this and would it be contributing positively to our society.”

“The idea evolved beyond a series of videos to a compilation of expert guidelines from different levels and a successful story on how religion, science and social work together to make a point,” added Dr Slimi.

The 6 Before Marriage titles and issues each film addresses are:

–          “Communication” (Strategies on How to Establish Meaningful Communication with Your Spouse)

The 4 After Marriage film titles and issues each film addresses are:

–          “De-escalation” (How to Lower the Emotional Temperature When Conflicts Arise)