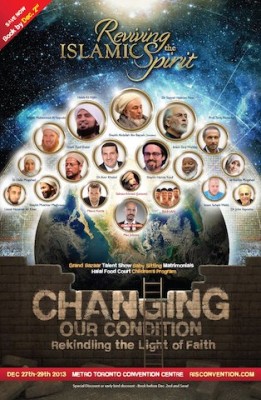 (December 26, 2013) – Thousands of Muslims from across North America and beyond started arriving in Toronto for one of the largest gatherings of Western Muslims, the annual Reviving the Islamic Spirit Convention (RIS).

“This year’s convention will revolve around the theme of ‘Changing our Condition: Rekindling the Light of Faith’,” said RIS Chairman, Fouzan Khan.

“The Qur’an makes a strong call to the practice of introspection and self-improvement.”

“This year’s conference aims to contextualize this message and remind us how it applies today,” Khan added.

The event, to run from December 27 through December 29, will be held in the heart of downtown Toronto at the Metro Toronto Convention Center, next to the iconic CN Tower.

The convention has become a staple in Toronto’s downtown core during the Christmas holiday season and an estimated 20,000 attendees are expected from all over North America and beyond, adding a boost to the local economy.

“We want to help inspire open-minded agents of change and not absent citizens,” noted Khan.

The Convention will begin at the Friday congregational prayer with the sermon to be delivered by Ustadh Nouman Ali Khan, a popular speaker among youths.

This year’s dinner will feature a keynote address by Dr. John Esposito, a leading professor of Religion and International Studies at Georgetown University.

In addition to being a place for intellectual thought, RIS hosts an exciting line-up of entertainers including Malaysian musical artists, Raihan, and well-known stand-up comedian, Maz Jobrani.

Social Gathering
Gathering scholars, intellectuals and entertainers, the RIS has turned into an event for all Muslims.

“The unique aspect of the convention is there is something for everyone,” said RIS spokeswoman Farhia Ahmed.

“Whether you are inclined intellectually or artistically, young or old, practitioner or someone just curious, RIS will always have something to offer.”

A bustling grand bazaar will once again be a major feature during the three-day event showcasing products and services from around North America and the Muslim world.

The convention will also host the annual food and coat drive to assist the needy in the Greater Toronto Area.

“Our goal is to bring people together in a wholesome, judgment-free setting, regardless of one’s background,” added Ahmed.

“The overarching vision of the RIS Convention is to address pertinent issues relating to Muslim youth and inculcate a strong identity that is true to both faith and modern realities,” said Fouzan Khan.

“It is an attempt by the youth to help overcome new challenges of communication and integration.”