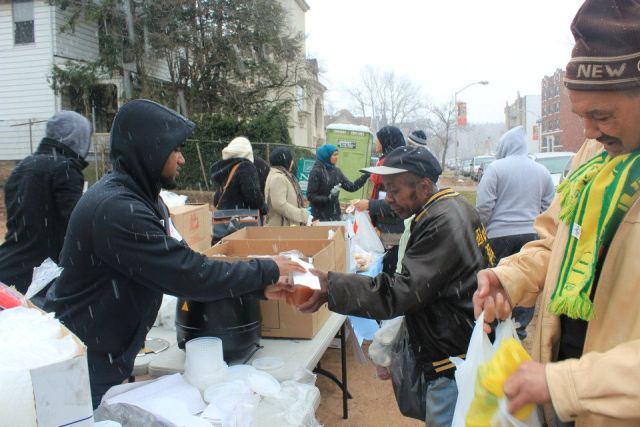 (May 3, 2013) – Every month, American Muslims are feeding thousands of hungry and homeless people in the inner-city neighborhoods of New Jersey and Pennsylvania.

“We see this as a huge need and an opportunity to reach out and help our brothers and sisters in this community,” Aliza Haniff, an Administrator at the National Islamic Association Soup Kitchen Program, told OnIslam.net.

“As Muslims, we thank Allah for this opportunity and, Al-hamdulillaah, we are going into our third year with our soup kitchen.”

The National Islamic Association (NIA), a mosque in Newark, New Jersey, is one of the Islamic Centers that partner with the American Muslims for Hunger Relief (AMHR) every month to run a soup kitchen at its facilities.

AMHR is a grassroots, social relief organization that coordinates the collection and distribution of food by working in collaboration with local businesses who donate food items and with local mosques, Islamic centers, and social service groups who distribute the food through soup kitchens, food banks and meal-on-wheels programs.

In March, the organization distributed 1,000 meals in a Saturday morning blitz to feed the hungry and homeless in New Jersey and Philadelphia.

In 2011, 46.2 million people, nearly 15 percent of the American population, were living in poverty, according to the US Census Bureau, while 17.9 million households were food insecure.

The National Islamic Association mosque is situated in an inner-city neighbourhood in New Jersey where food insecurity is an issue among families.

“NIA became involved in this initiative to give back to our local Roseville Avenue community in New Jersey, which has a range of low to middle class residents,” said Haniff.

“AMFHR provided the food for us to provide to our local community – we set up tables outside on the sidewalk and we have a production line that assembles bags of bread, water, fruits and we serve this with a cup of hot soup.”

The AMHR says its goal is to create a volunteer network in the inner cities on the East Coast to fight and eradicate hunger.

“Our vision is to forge a partnership with local mosques, Islamic centers, and soup kitchens to help our cause and create a volunteer task force to fight and eradicate hunger by establishing soup kitchens, hunger awareness weeks, meals-on-wheels and food banks,” states the organization on its website.

Mosque officials see the soup kitchen initiative as an important part of their community outreach program.

“NIA is using this as part of its educational and outreach program for the community, regardless of age, gender, or religious beliefs,” Haniff told IQRA.ca.

“We do not give out dawah materials during our soup kitchen events because we do not feel dawah should be leveraged against those in need of food.

“Our sole purpose is to feed the community,” she added. “If people ask us about Islam, we provide them with verbal information.”

Meanwhile, the NIA mosque is hoping to have better kitchen facilities to prepare meals for the needy once their new Islamic Center, currently under construction, is complete.

“Currently our biggest challenge is the lack of a kitchen facility since our new Masjid and Community Center is under construction,” said Haniff.

“AMHR has been a tremendous ally in assisting NIA with these efforts, particularly since we have lost our kitchen facilities due to the ongoing construction.

“Inshallah, we will have a new building with a full kitchen this summer and we can continue to prepare meals for the needy.”

Though there are no official statistics, the US is believed to be home to 7-8 million Muslim.