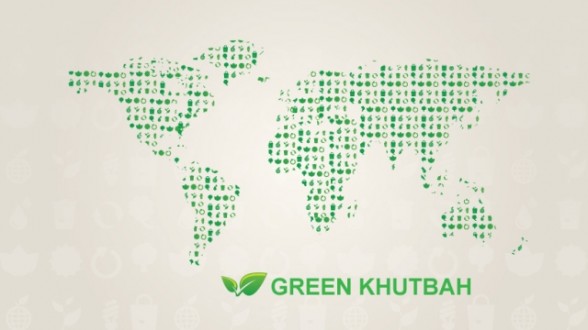 (April 14, 2013) – Muslims across the world will be encouraged to ‘Green their Deen’ on Friday, April 19th, 2013,  as religious leaders will deliver a sermon as part of the Annual Green Khutbah Campaign  to raise awareness on the environmental challenges facing humanity.

“We are encouraging mosques, schools, universities and Islamic Institutions to devote their Friday Khutbah to celebrate the blessings, graces and beauty of all of God’s creation and to raise awareness on the environmental challenges facing humanity,” Muaz Nasir, the publisher of the Canadian environmental website, Khaleafa.com and one of the organizers of the campaign, told IQRA.

“This year’s ‘Green Khutbah Campaign’ challenge is to request all Muslims to commit to the 3 C  action plan – to consume less,  conserve more and care for the environment,” Nasir added.

The Campaign was launched last year and saw Imams across the North America and Europe deliver a message that reminded their congregations of the Qur’anic message to be stewards of the earth and its environment.

The ‘Green Khutbah Campaign’ commemorates Earth Day which will take place on April 22 and the organizers are hoping to extend the campaign to other Muslim communities across the world.

The Campaign has been picked up in other parts of the world with Muslims in Thailand and South Africa pledging to deliver a ‘green’ Khutbah.

Environmental concern among the global public is on the wane, according to a GlobeScan which tracked public concern on six environmental issues in its annual Radar global poll.

The poll found that across eighteen countries, public concern about water pollution, fresh water shortages, natural resource depletion, air pollution, climate change and biodiversity loss is way down from its peak in 2009.

“The period since 2009 has witnessed the most sustained period of economic strife in most of the world’s major economies for the better part of a century,” wrote GlobScan’s Director, Sam Mountford, in an article on GreenBiz.com. “And bluntly, for many citizens, these appear to pose a much clearer and more present threat to their well-being than environmental jeopardy, which for most people remains hidden from view.”

However, Muaz Nasir says that Muslims cannot tune out from the environmental damage.

“Those who violate or abuse the Trust are described in the Qur’an as those who corrupt, degrade and bring ruin on earth,” Nasir added. “The corrupters abuse the Trust and are in clear contrast to what Muslims must be – the stewards of the earth.”

An extensive online resource has been created by Khaleafa.com (www.Khaleafa.com/greenkhutbah) to support the campaign and Islamic organizations and well-known leaders are throwing their support behind the initiative.