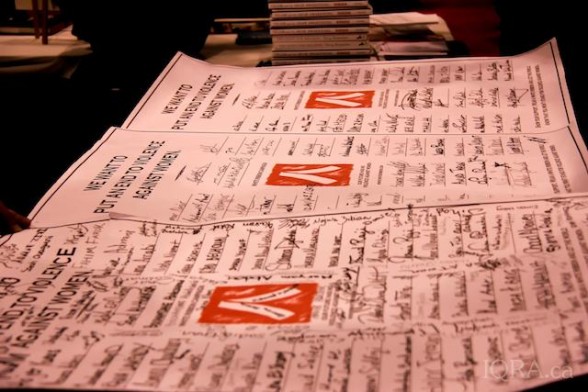 (December 8, 2013) – Imams sent a strong message to Canadians during last Friday’s sermon that violence against women is unacceptable.

“Violence against women in the wider society is a reality and the Friday sermon brings the issue to light and it serves to help our communities become more aware of this reality,” said Imam AbdurRashid Taylor, Co-Chair of the Muslims for White Ribbon Campaign and Secretary of the Canadian Council of Imams, told IQRA.

“This awareness helps Muslim communities make the commitment to stop violence against women and to speak out against it with a united voice.”

The national Khutba campaign in mosques around the country coincided with the National Day of Remembrance and Action on Violence against Women in Canada and is one of the initiatives of the Muslims for White Ribbon Campaign.

Campaign organizers estimate that tens of thousands of congregants in mosques across the country heard sermons condemning violence against women and, throughout Friday, the White Ribbon pledge was shared with an impressive number of social media users.

The Muslims for White Ribbon Campaign was launched three years ago with Imams and Muslim leaders committing to join with others to work to end violence against women.

“By wearing a white ribbon and making a personal pledge to ‘never commit, condone or remain silent about violence against women and girls’ men can act as positive role models and advocates for change,” said Imam AbdurRashid Taylor.

“The campaign is organized by a committee of volunteers – fathers, sons, grandfathers, brothers, uncles, and friends,” he added. “Violence against women and girls is unacceptable and we are committed to working with our fellow citizens to eliminate it.”

Faith leaders have an important role to play in bringing their moral authority as religious leaders to condemn violence against women, according to Imam AbdurRashid Taylor.

“In our communities, Imams are respected and are called to lead by example,” said Imam AbdurRashid Taylor. “By discussing the issue of violence against women in a sermon, it helps community members realize that there is an issue in our community that needs addressing and an issue that we need to collectively work on.”

“Imams need to be part of the solution of stopping violence in the family and to demonstrate to the wider community that Muslim leaders are taking a stand against this violence,” Imam Taylor added. “Doing this in a Friday sermon commands the best audience and is extremely effective.”

The Khutba message from the Imams was delivered on the day that is commemorated every year as the National Day of Remembrance and Action on Violence Against Women in Canada.

On December 6, 1989 a gunman entered a college in Montreal, l’École Polytechnique de Montréal, and segregated the female engineering students from the male students and began firing on the young women.  On that day, 14 young women lost their lives in the worst gender-based massacre in Canadian history.

Apart from the Khutba campaign, one of the major goals of the Muslims for White Ribbon Campaign is to break the silence on violence against women in the Muslim community by encouraging mosques and organizations to sponsor awareness events.

It also aims to promote healthy relationships through education and create partnerships among mosques, women’s organizations, and social agencies to work towards a future without violence against women.

“Our campaign is going into the third year of awareness building,” Imam AbdurRashid Taylor told IQRA. “The next step is to get active, to go beyond words – sensitivity and training for Imams to address violence against women, education on how women and families can get help and counseling for Muslim men that perpetrate violence in their families are parts of these next steps.”

The Campaign, which started on November 25, 2013 [International Day for the Elimination of Violence Against Women], will culminate in White Ribbon Days at largest Muslim gathering in the West, the Reviving the Islamic Spirit Conference at the Metro Toronto Convention Centre (Dec 27 – Dec 29).