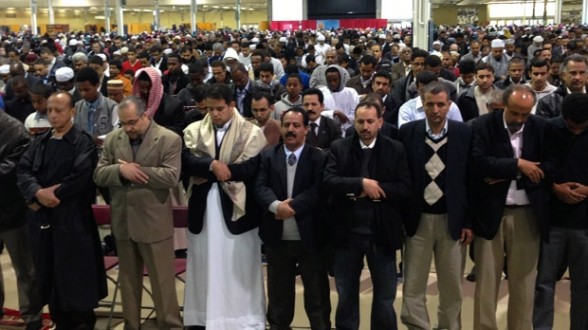 (October 17, 2013) – Overcoming challenges to share `Eid with all Muslims, special `Eid prayers and celebrations have been hosted at Toronto’s CNE Direct Energy Centre with a colorful display of the community’s diversity and compassion to the city’s special needs population.

“We’ve organized this `Eid to be accessible to all members of our community,” Abdussalam Nakua, spokesperson for the Muslim Association of Canada, told OnIslam.net.

“This year we are focusing on expanding the accessibility to include people with needs – whether mobility, physical, or mental.”

“So in addition to the sign-language khutba and speeches, we’ve worked on making the whole venue wheel-chair accessibility and friendly, the whole layout was done with this in mind.”

The grand Toronto event was organized by the Muslim Association of Canada (MAC), a national organization currently operating in 11 Canadian cities.

While some Muslim communities in the country celebrated `Eid on Tuesday, in accordance with the ruling of the Fiqh Council of North America which follows the Day of Arafat in Saudi Arabia, other Muslim organizations that follow the actual sighting of the new moon in North America observed the `Eid on Wednesday.

In an impressive display of unity, Muslims of all ethnicities dressed in traditional clothing flocked to the large and spacious Toronto convention center to offer the prayers and take part in an all-day festival.

Toronto, with a population of 2.79 million people is heralded as one of the most multicultural cities in the world and is ranked as the safest large metropolitan area in North America by Places Rated Almanac.

Over 140 languages and dialects are spoken in the city, and just over 30 per cent of Toronto residents speak a language other than English or French at home.

The city has the largest Muslim population in Canada.

The survey of almost three million people showed that Muslims now represent 3.2 percent of Canada’s total population, up from 2.0 percent recorded in the 2001 Census.

In his sermon, Canadian Imam, Dr. Abdullah Hakim Quick who is an international speaker, da’wah worker and historian, called on the gathering to recognize and celebrate the community’s diversity.

“This is one of the special days of Allah,” said Dr. Abdullah Hakim.

“He has gathered us together in purity and righteousness – all colors, all nations, all languages.”

Dr. Abdullah Hakim in his eloquent and highly motivating address advised the audience to avoid any sort of extremism.

“We have to avoid uncontrolled emotions and extremism,” he said. “We have to hold ourselves, despite the pressure that is upon us – we don’t fight evil with evil.”

Following the prayer the festivities began with a carnival including rides, inflatables, video games, a toddler zone, sports, games and tournaments, as well as, shows.

There was also a bazaar featuring the products and services from businesses in and around the Greater Toronto Area.

In the feast of sacrifice, the Muslim Association of Canada was keen on promoting the distribution of the sacrificial Udhiyah or Qurbani meat to the local needy population.

“Charity is local, and meant to be a pillar for community development,” Abdussalam Nakua, spokesperson of the Muslim Association of Canada, told OnIslam.net.

“Many people have this idea that there is greater need in countries struck by calamities and natural disasters, but a considerable segment of our communities depend on food banks to meet their basic needs.”

“Sharing something as Qurbani with our friends and community allows us to share our `Eid with the wider community,” noted Abdussalam Nakua.

“To illustrate this point, our `Eid lunch with Scadding Court Community Center is expected to attract 1,200 people, with 1,000 already registered.”

In addition, the organization runs a unique program, the Sponsor A Family/Child program, with local social services agencies to help families facing economic hardship to celebrate `Eid with the rest of the Muslim community.

`Eid Al-Adha, or “Feast of Sacrifice”, marks the end of the Hajj season and is one of the two most important Islamic celebrations, together with `Eid Al-Fitr.

A financially-able Muslim sacrifices a single sheep or goat or shares with six others in sacrificing a camel or cow as an act of worship during the four-day `Eid Al-Adha celebrations.

The ritual commemorates Prophet Ibrahim’s willingness to sacrifice his son Ismail to Allah as an act of obedience and submission.

The Udhiyah meat is divided in three equal parts, one each for one’s own family, friends and the poor.

It is permissible that someone in another country could perform the sacrifice on one’s behalf.

Dr. Abdullah Hakim Quick, in his sermon, noted the strong desire for change sweeping through Muslim communities and in Muslim majority countries.

“In some countries they want the system to come down and some people are waiting for a Mahdi.”

“But Allah has said clearly (in the Qur’an) that He will not change the condition of a people until they change that which is in themselves,” he added. “The internal Muslim, inside our hearts, we need to make this change.”

The Imam then went on to outline ten practical steps for change.

In his manifesto for change, Dr. Abdullah Hakim urged the congregation to get closer to Allah, rectify their practice of the religion and pay special attention to improving their characters.

He went on to advise the `Eid gathering to build strong families and communities, with special emphasis on youth, new Muslims and on conducting their affairs using mutual consultation (shura).

“We have to discuss things, we have to have shura in our homes, shura in our masajid, shura in our nations,” he said. “It is critical now that Muslims talk to each other and make decisions in Jamaah.”

Dr. Abdullah Hakim concluded his sermon with an emotional plea to remember the oppressed around the world.

“May Allah bring peace and comfort to those who are suffering in the Muslim world.”