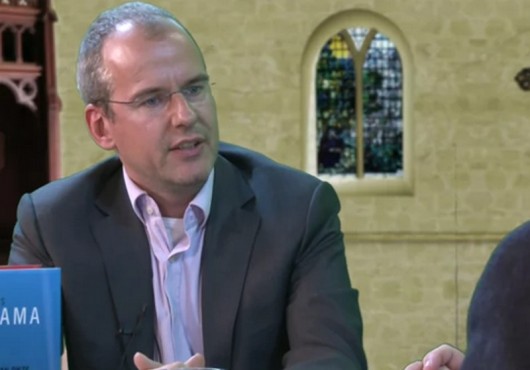 (August 27, 2013) – Arnoud van Doorn, a former member of Geert Wilders’ far right party in the Netherlands, told a Toronto audience that ignorance and misinformation are the root causes behind the rising wave of Islamophobia in Europe.

He was speaking at forum organized at the Islamic Center of Canada at the start of his Canadian tour on last Saturday.

Earlier this year, van Doorn accepted Islam and is now on a mission to combat Islamophobia.

Narrating his journey, van Doorn told the gathering how he was recruited by Geert Wilders for his media and communication skills.

After intense training of several months, he became a personal assistant to Geert Wilders and fully participated in his anti-Islam campaigns.

He acknowledged that throughout this time all the information he had about Islam was from the anti-Islam camp.

The seeds of change for van Doorn were placed when a Muslim man asked him to just listen to what Muslims have to say.

That three hour conversation led to a revolutionary shift in attitude which was further cemented by his extensive readings on Islam.

“I found that Islam as a religion fits me. It can fit the entire humanity,” said van Doorn.

As a result of his conversion he had to face many problems, including a considerable loss in income, but he said that the peace and serenity he has found in Islam more than compensated for that.

Van Doorn urged Muslims to be patient and steadfast and not to succumb to any provocations.

He also urged them to fully participate in the democratic process.

Van Doorn, who still serves as a member of the city council of Hague, said Muslims in Netherlands haven’t been able to reap the benefits of their large numbers as they are divided on regional, sectarian and other lines.

In addition, he said many Dutch Muslims hold the mistaken belief that Islam prohibits voting in the elections and, although their population is close to a million which could easily translate into five to seven percent of the seats, they are unable to take advantage of their numbers as a result of their divisions.

Van Doorn said that he is now busy organizing a party which will advance the cause of justice and equality for all in the country.