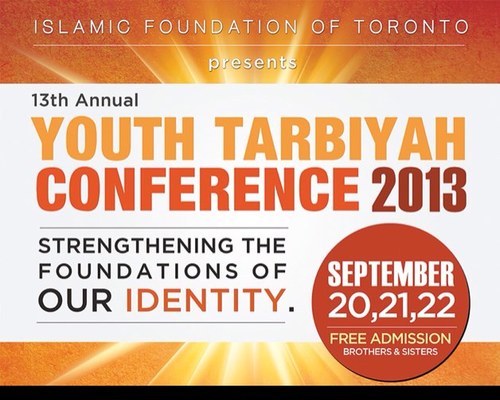 (September 21, 2013) – Canadian Muslims should join the discussion on what it means to be a Canadian, according to Dr. Ingrid Mattson, a well-known academic and Muslim leader.

“But that is not how Canadians always have been or always will be and the picture of who is a Canadian is constantly evolving,” she added. “In fact, when we talk about Canadian Muslim identity, one thing we have to know is that there is nothing more Canadian that to talk about identity.”

She made the remarks on Friday, September 20 during a keynote speech delivered at the Islamic Foundation of Toronto’s 13th Annual Youth Tarbiyah Conference.

Dr. Ingrid Mattson is the London and Windsor Community Chair in Islamic Studies at Huron University College at the University of Western Ontario in London, Canada.

Addressing the topic, “Muslim Canucks: What It Means to be Canadian Muslim,” Dr. Mattson urged the audience to learn about the country’s history and stand in solidarity with the First Nations people.

“To be a Canadian Muslim means that we have to know our history, we have to know the legal origins of this place and we have to take our story of struggle and be in solidarity with the people who continue to struggle,” said Dr. Mattson.

“One of things I want Muslims to really understand is that we have allies and we need to reach out to them and I bring up the issue of First Nations people because it can help us understand that we are not alone – and it should also help us understand our responsibility.”

“But as a Canadian, a country that belonged to people who were then oppressed, who had their children stolen from them, their children abused, malnourished – abuse in all sorts of ways and who the government we have sworn allegiance to, they made over 600 treaties with the people who owned this country and many of those treaties have been broken.”

She went on to remind the audience of the moral responsibility these issues placed on people of conscience in this country.

“We live on stolen land,” she said. “As a Muslim, it is forbidden for me to enjoy stolen goods.”

“Allah tells us that we have to uphold our word and our contracts and our covenants,” she added.

Dr. Ingrid Mattson, a Canadian, recently returned to the country from the United States where she held a number of high profile positions. She is the former director of the Chaplaincy Program at Hartford Seminary in Connecticut and the former President of the Islamic Society of North America.

The Islamic Foundation of Toronto, one of the earliest and largest mosques in the Greater Toronto Area, has been hosting the Tarbiyah Youth Conference annually for the past 13 years.

“Our objective through this conference is to strive towards educating the youth and masses, amidst the challenges we face in the 21st century, while encouraging them to be active, integral members of the mosque community and adopt leadership roles in mainstream society,” states the conference organizers on their website.

“What it means really to be a Canadian Muslim is that you care about your neighbors, you don’t have to look a certain way, you don’t have to join this club or that club, but that you care about the people around you, you care for their welfare and that you want something good for them and you want to contribute to all of things that will continue to make the country better and a place where more people are given their rights and all their basic needs.”