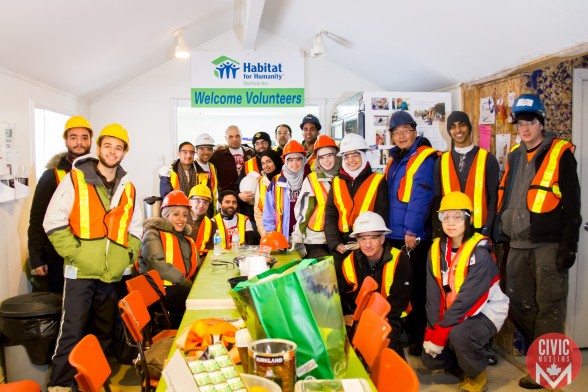 A recent collaboration with Habitat for Humanity Toronto by the CivicMuslims organization helped their volunteers appreciate the importance of safe and accessible housing.

The Habitat for Humanity team build event was held on Saturday, February 23, at their Oshawa build site.

“The issue of access to affordable housing also affects the Muslim community as well, with many newcomers facing similar barriers – lack of employment, references or credit history – that may impede them from securing safe and affordable home” added Nasir.

CivicMuslims is a Toronto-based group of young Canadian Muslims with a passion for volunteerism and civic engagement.

Habitat Toronto is an affiliate of Habitat for Humanity, a world renowned organization known for mobilizing volunteers to build affordable housing and promote homeownership as a means to breaking the cycle of poverty. 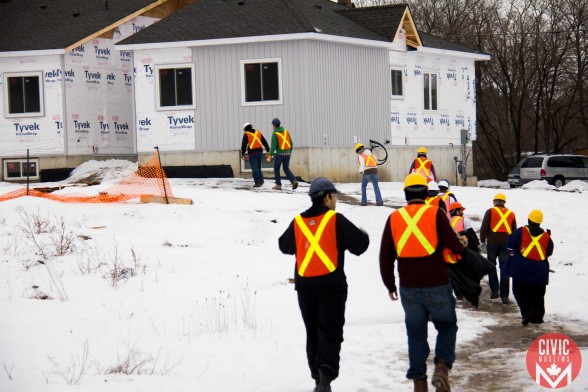 “Since our beginning, community groups have been a cornerstone of support for Habitat for Humanity affiliates all over the world,” Enloe Wilson, Faith & Community Development Officer Habitat for Humanity Toronto told IQRA. “Whether they offer time, money or mere connectivity in the community, our founder Millard Fuller recognized the appropriateness of everyday people coming together to support everyday people.”

Habitat houses are sold to partner families at no profit and are financed with affordable, no-interest mortgages. The homeowners’ monthly mortgage payments go into a revolving fund, which is used to build more homes.

At the Oshawa build site, CivicMuslims volunteers were given a brief overview of the project and safety procedures, and were then broken up into several groups. 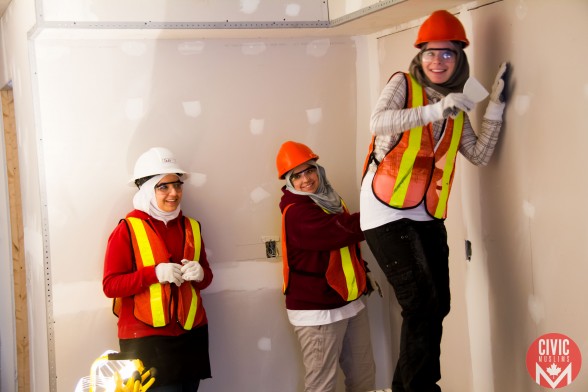 The tasks of the day involved putting up drywall, mudding the seams and joints, putting up vinyl siding and sealing cracks in the buildings moisture barrier.

The volunteers appreciated the social challenges that often prevent families from accessing a safe and secure home.

“Volunteering with Habitat for Humanity has taught me to reflect upon the innumerable blessings that Allah has granted me, one of them being not having to worry about finding daily shelter that serves as protection from the elements and so much more,” said Robin Rahman, a CivicMuslims Volunteer. “It was truly rewarding to be able to work with a team of volunteers to help build homes for people in need.”

According to Muaz Nasir, the activity, which also raised $1535 for Habitat, was chosen because their values closely mirrored the organizational mandate of CivicMuslims – ‘Volunteer, Connect, Grow.’ 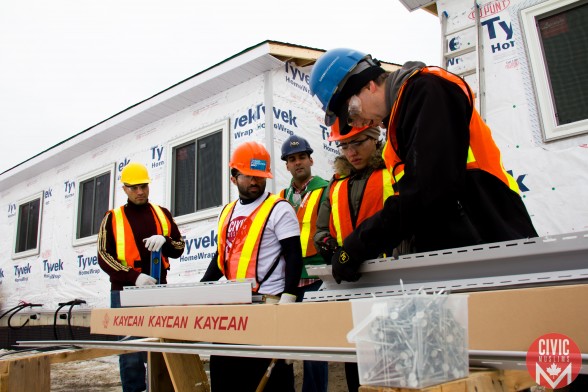 “This opportunity touched upon all three concepts of our slogan,” he said. “Habitat works with people of all faiths and beliefs in a spirit of justice and compassion and this core tenet touched upon the Islamic beliefs of civic action and altruism that CivicMuslims was founded on.”

“And for we, People of the Book, who share common roots in the hospitality of Abraham, this service holds not only an important civic, but a sacred, role in our lives,” said Enloe Wilson. “It’s an honour, then, for our Christian organization to work alongside our Muslim brothers and sisters.”