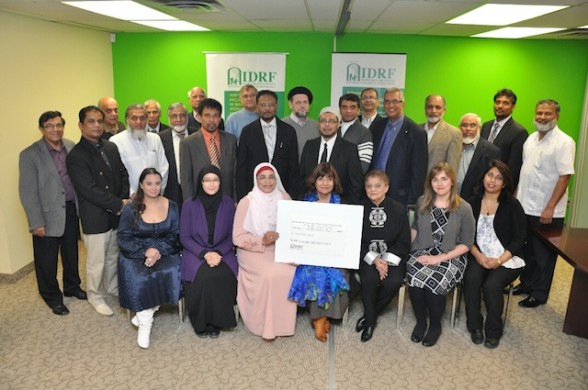 (December 7, 2013) – Canadian Muslim organizations came together last Wednesday, December 4, to announce a donation of $80,000 towards the Typhoon Haiyan relief fund.

“Masjids and Islamic organizations in Ontario have donated towards the relief fund in the amount of $80,000 so far and came together tonight, at this reception, to make the presentation to International Development and Relief Foundation (IDRF),” Habeeb Alli, Community Development Manager of IDRF, told IQRA.

International Development and Relief Foundation (IDRF) is Canadian-based, charitable relief organization, whose stated mission is ‘dedicated to empowering the disadvantaged people of the world.’ The organization has successfully implemented relief and development projects, over the past three decades, in Asia, Africa, the Middle East, Eastern Europe, and the Americas.

“The funds will be used for water purification units supervised by GlobalMedic for those affected in the camps of Tacloban and the extension until December 23 provides Canadians further incentive to have their donations matched by the Canadian Government,” added Alli. 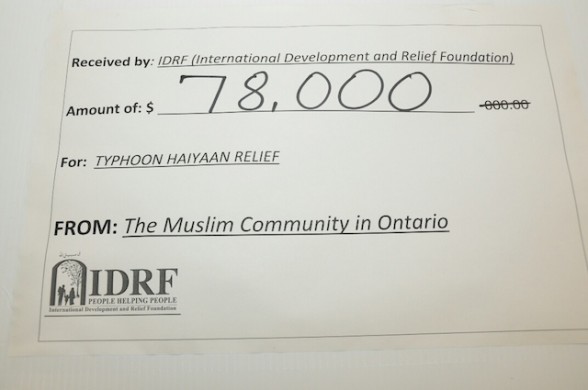 GlobalMedic utilizes professional Canadian rescuers, specifically paramedics, police officers, firefighters and engineers who volunteer their time and skills to help those in need around the world.

The organization specializes in providing clean drinking water to affected populations after a disaster. With the use of mobile water purification units and water purification tablets, GlobalMedic establishes easily accessible water stations for rural and urban centres in addition to mass distribution programs.

“IDRF has already begun responding with relief aid and, in an effort to offset the danger of water borne diseases from the polluted waters, is moving quickly to provide water purification units to families living in evacuation centers in the areas of Tacloban city and sites in Samar Province,” said Habeel Alli.  “We will continue to assess the situation and, with generous community support, will respond in ways that have the greatest impact.” 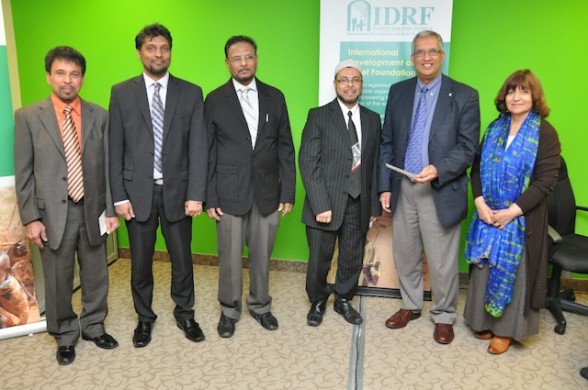 Typhoon Haiyan, one of the most powerful typhoons ever recorded, hit the Philippines early in the morning on Friday, 8 November. It reduced most of what was in its path to rubble. It killed at least 5,796 people with 1,779 others still missing, displaced nearly 4 million and the UN estimates that 12 million lives are at risk.

The breadth of the damage is still unfolding and the needs for the millions of people affected by the storm are immense, United Nations humanitarian agencies warned Friday, urging the world to continue to support the massive relief effort under way in the archipelago.

“Just because the situation in the Philippines is no longer in the news does not mean that the needs in the country have diminished,” said Elizabeth Byrs, spokesperson for the UN World Food Programme (WFP), in a press briefing in Geneva.

“IDRF will not be charging any administrative fees on funds collected for this relief,” Habeeb Alli, Community Development Manager of IDRF, told IQRA. “100% of donations collected will be going towards this water filters project.”