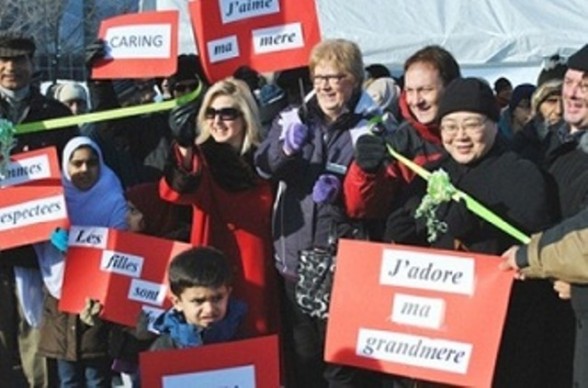 Celebrating family values, Canadian Muslims in the Province of Ontario took part in walkathons on Monday, February 18, to show support for women’s rights and raise funds for local hospitals.

“While emphasizing the importance of family life in general, each year has a unique theme focusing on a particular aspect of our family life,” Abdul Qayyum Mufti, Chair of the Walkathons, told IQRA.ca.

“This year’s program theme is ‘Honoring women: custodians of our future generations’.”

As they marched, they held bilingual placards bearing slogans like “friendship,” “caring” and “J’aime ma mère” (“I love my mother”).

This year’s walkathon raised $70,000 for the hospital which was presented to officials at a ceremony in the Mississauga City Hall following the walk.

The event, called the Family Day Walkathon, raised $70,000 for Credit Valley hospital, which was handed over at a packed ceremony in City Hall directly after the walk.

The event, now in its third year, has grown rapidly since it was first held in 2011.

That event attracted around 500 participants and raised $50,000 for Credit Valley hospital.

Family Day is a public holiday in the three Canadian provinces of Alberta, Saskatchewan, and Ontario and is observed on the third Monday of February.

The Mississauga Muslim community, a city in the suburbs of Toronto, has been at the forefront of the Family Day Walkathon.

It has raised a total of $110,000 towards the Lifetime of Care building expansion program at Credit Valley Hospital.

“Honoring women, that’s the only answer to the world’s problems today,” Mayor Hazel McCallion said, calling for women to take the reins of government.

“If we can organize the women in the developing world and all over the world to be in leadership roles, things would be different, no question about it.

The march has drawn participants from all different faiths to reiterate respect for women’s rights.

“We all work for improving the conditions of all living together,” said Abdul Qayyum.

Abdul Qayyum said raising funds for hospitals isn’t the only purpose of the event.

“It also encourages volunteerism, helps teach the value of the health care system, promotes the idea of neighbors assisting each other and builds bridges between diverse local communities.”