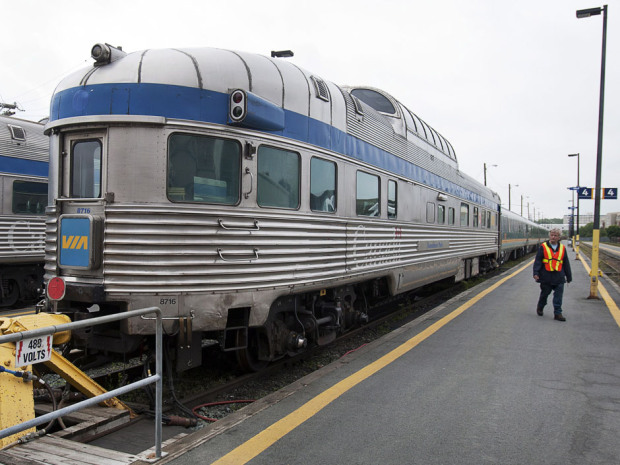 (April 22, 2013) – Canadian Security officials arrested two men on Monday for conspiring to carry out a terror attack on a transcontinental passenger train.

Two non-Canadians, Chiheb Esseghaier, 30, a resident of Montreal and Raed Jaser, 35, a resident of Toronto are facing terror-related criminal charges for allegedly planning to carry out an “Al Qaeda-supported” attack to derail a VIA passenger train.

Reuters report that U.S. officials said the attack would have targeted a rail line between New York and Toronto, a route that travels along the Hudson Valley into New York and enters Canada near Niagara Falls.

“Had this plot been carried out, it would have resulted in innocent people being killed or seriously injured,” Assistant Royal Canadian Mounted Police (RCMP) Commissioner, James Malizia, told reporters Monday afternoon at a news conference in Toronto.

The two men are facing charges of conspiring to interfere with transportation facilities and conspiring to murder persons unknown for the benefit of a terrorist group.

They are to appear in court Tuesday in Toronto for a bail hearing.

Commissioner James Malizia said the two accused were getting “direction and guidance” from al-Qaeda elements in Iran.

“While the RCMP believed that these individuals had the capacity and intent to carry out these criminal acts, there was no imminent threat to the general public, rail employees, train passengers or infrastructure,” added Malizia.

Chiheb Esseghaier is originally from Tunisia, while Raed Jaser is from the United Arab Emirates.

New agencies report that Chiheb Esseghaier has been a PhD student at the Institut National de la Recherche Scientifique near Montreal since 2010.

“He is doing a PhD in the field of energy and materials sciences,” Julie Martineau, the school’s director of communications, told Reuters.

Police said that the men did surveillance on VIA trains and railways in the Greater Toronto Area.

In a statement, VIA Rail said “at no time was there an imminent threat to the VIA Rail passengers, employees or the general public.”

None of the leaders present at the meeting knew the two suspects but the RCMP told them that they received tips from the Muslim community that led to the arrests.

Canada’s Public Safety Minister, Vic Toews, commended the security and police agencies in Canada and the United States for their efforts in the case.

“I would like to commend the RCMP, CSIS, local law enforcement and all the agencies involved for their collaboration with security and law enforcement partners, and the thoroughness of the investigation that has led to these charges,” said Minister Vic Toews. “I would also like to thank the FBI for their assistance throughout this investigation and their cooperation in bringing it to a successful conclusion.”

“Canadians can be assured that our government will stand firm in our commitment to protecting this country from terrorists and the fear they hope to generate.”