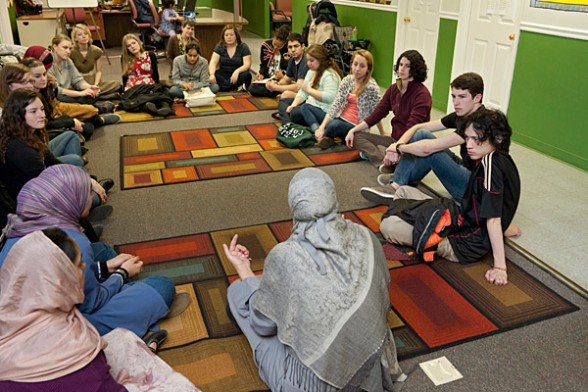 The Creator addresses women as being on an equal footing with men, their status as beings and believers  is the same as men’s and the requirements of worship are absolutely identical.

(November 20, 2013) – When it comes to religion, it may well be over the women’s issue that tensions, contradictions, and concerns are most frequent and complex.

This involves human relationships, deep-seated representation, and relationship logic that, beyond scriptural sources themselves, have to do with age-old cultural and social heritages that remain deeply ingrained and highly sensitive.

Speaking about women in any human group means interfering with the groundwork of social structures, of cultural symbolisms, of gender roles, of the position of the family unit, and of authority and power relationships.

It also means speaking about human beings, their freedom, their autonomy, and their individual, spiritual, and social aspirations.

Discourse about women reveals collective mind-sets, confidence and fear, the protective strength of what is said and the unsaid, and the deep-rooted foundations of social structures and their role.

This is no simple matter: complex, interdependent issues are involved, and focusing on one dimension rather than another can sometimes lead to excess and distortion in both criticisms and claims.

Yet debate is necessary.

In recent years, debate in the West, and subsequently in Muslim-majority countries, has focused on the more visible aspects of the “status of women in Islam.”

This is indeed an essential issue, but reducing it to a passionate, oversimplified debate about a list of “problem practices” has led to evading the heart of the matter.

The issue of “Muslim women” is being bandied about today as if it characterised the irreconcilable relationship between Islam and the West, the opposition between a universe of submission and another holding the promise of freedom, with, of course, the leitmotiv of the contrast between patriarchal traditions and western modernity said to be an increasingly feminine viewpoint.

Then the list of discriminations related to dress, polygamy, violence, inheritance, and other issues. is repeated again and again.

Aside from the fact that the substance of the claims presented here is open to debate (while of course, the nature of the discriminations Muslim women may face today must not be understated), it seems imperative to broaden the scope of the debate and return to the sources and fundamentals of representations and discourses.

Many Muslim women and men have already started this essential work on the contents of scriptural sources: how they should be read and interpreted, and how they relate to surrounding cultures and social structures.

Such studies must be carried out, although two main pitfalls must be avoided.

On the one hand, one must beware of focusing too much on some sensitive issues having to do with text interpretation while neglecting a more comprehensive approach that would link texts, the social environment, and the logics that in this latter case legitimise specific readings and sometimes result in inducing false religious truisms.

On the other hand, one must avoid thinking about this process of critical reconsideration only in terms of the West, no matter whether the latter is praised or rejected.

Clearly, the internal debate in the light of scriptural sources must be thought through and started from within, and it cannot simply and naturally identify with, or be assimilated with, categories introduced by women and feminists in western societies.

It would, however, be wrong and inconsistent to reject the reflections produced by the long and intense debates and confrontations in modern societies about the issue of womanhood, of women’s autonomy, their sexuality, their roles (in the family, in society, or economically and politically), as well as logics of power and processes of alienation.

Starting from a divine Revelation, some questions are bound to be highly specific and must be tackled as such, but one should also study all possible interactions between early interpreters, their cultural environment, and social structures.

The feminine equation includes several factors and requires that certain standpoints be taken from the beginning, even before starting to discuss the nature of the research and proposed solutions.

Regarding the issue of women, I think it will not be enough to rely on a few bold legal opinions — opening the way to new prospects — to further the cause of women in any fundamental way.

In this field, seeking justice, ending discriminations, and promoting reform require us, as a priority, to reassess the framework and methodology that have been determined in order to understand and remain faithful to scriptural sources through history and in different sociocultural environments.

Later in the process, this implies integrating the latter into the reflection and understanding of male-female relations and the distribution of roles and power.

This also means carrying such reflection to its logical extent by giving thorough consideration to the alienation situations in which women, instead of being subjects, become the objects of men’s or society’s representations.

This includes studying the perverted logics through which some demands have backfired and caused women to move from one form of alienation to another.

Many women, among them feminists, have dealt with those developments and sometimes those paradoxes, and their reflections should be read and studied.

They shed light on possibly converging views about sociopolitical and cultural issues and emphasise essential differences as related to oneself, to the being, to others, and consequently to freedom.

Initially, Quranic verses used only the masculine plural form to refer to the women and men in the new faith community.

For years, “believers” (Al Mu’minun), and “the truthful” (As Sadiqun), either referred specifically to men or to the men and women who constituted the Prophet’s (PBUH) first Companions.

Once, a woman (or several, according to the different traditions) asked the Prophet (PBUH) why women were not explicitly mentioned in the revealed message.

The Book — which, while revealing a universal message, also included responses to the questions asked by the men around the Prophet (PBUH) — was later to mention women and men distinctly.

This evolution of the message is part of divine pedagogy in the process of revelation carried out over 23 years: the faithful are thus led to evolve in their understanding of things and critically reconsider some of their cultural or social practices.

The status of women, who were sometimes killed at birth because of the shame they might bring, was to be reformed in stages, as verses were revealed.

It thus appeared more and more clearly that the Quran’s message and the Prophet’s (PBUH) attitude were apt to free women from the cultural shackles of Arab tribes and clans and from the practices of the time.

The Creator addresses women as being on an equal footing with men, their status as beings and believers is the same as men’s and the requirements of worship are absolutely identical.

They are partners on the spiritual path, in which support and protection are needed: “They are your garments as you are their garments.”

“Love and mercy [kindness]” are the heart’s resources that make life together possible: love to combine qualities, mercy to overlook failings and weaknesses.

Exile from Makkah to Madinah also played a major part in the evolution of mindsets among Muslims: women in Madinah were more evident, more involved, bolder and more assertive, and they surprised the Prophet’s (PBUH) Makkahan wife, the learned Aisha, who said: “Blessed be (what excellent women were) the Ansar women, whom modesty did not prevent from seeking instruction [in religious affairs]”.

The Madinah period helped sort out religious principles from Makkahan Arab customs and bring about changes in women’s status: the reform movement was thus started and accompanied by the Revelations, by social experiments, and, of course, by the Prophet’s (PBUH) attitude as the example the Companions were to follow.

The different verses were therefore to be read and interpreted in the light of that movement, and early readings and interpretations of revealed texts were to be viewed in the ideal mirror of the Prophet’s (PBUH) behaviour.

Accordingly, highly original interpretations regarding women, their status, and their rights appeared very early on.

The inner reform movement was perceived, understood, and commented on from the first centuries, during which the Text sciences were established, but it remains true that early readers were mainly men who read the Revelation through the double prism of their gender and of the culture in which they necessarily lived.

The Companions and early ulema could not but read the text in the light of their own situation, viewpoint, and context.

While the Book spoke about women, their being and their heart, fuqaha’ (experts in Islamic law) set out to determine their duties and their rights according to the various functions society imparted them.

Women were therefore “daughters”, “sisters”, “wives” or “mothers”; the legal and religious discourse about women was built on those categories.

It is indeed difficult for a man, and what is more a jurist, to approach the issue of women primarily as beings in their integrity and autonomy — whatever the internal process initiated by the different revelations or historical experiences, such an approach inevitably orients and restricts the reading and interpretation of texts.

Their concern was to impart a function to women, to draw up a list of rights and duties.

A closer reading of the texts, however, shows that the purpose of the inner evolution just mentioned, revisiting women’s status step by step, is in fact to bring the believing conscience to perceive women through their being, beyond their different social functions.

This inductive movement towards the primacy of being naturally involves an effect on the issue of social status; this, however, implies allowing full scope to the interpretation process and accepting all its consequences.