The ‘What Makes A Man. Higher Unlearning: The 2012 White Ribbon Conference’, was held last Saturday, February 11 at Ryerson University.

The discussion-focused event brought together speakers who gave short 5-10 minute talks followed by a 10-15 minute dialogue with the audience.

The event was organized by the Ryerson White Ribbon Campaign which works to end violence against women by inspiring men to be a part of change that affects the lives of men and women.

According to Jeff Perrera, Co-Chairperson of the Ryerson White Ribbon Campaign, the event ‘s purpose was to ‘share and reflect on how gender, gender constructs and pressures affect various aspects of our everyday life.’ 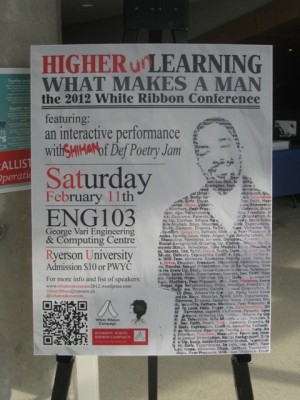 Afaun Mandol, Co-Chair of the White Ribbon Campaign spearheaded by Muslim Presence Toronto, was one of the presenters at the conference.

Muslim Presence Toronto launched the White Ribbon Campaign in the Muslim community at the Islamic Institute of Toronto on December 10.

The White Ribbon campaign comes on the heels of the “Call to Action to Eradicate Domestic Violence” statement that was recently issued by Canadian Islamic organizations and leaders and which saw Imams and Khateebs deliver sermons (khutbas) on domestic violence on December 9 in mosques across the country.

“The White Ribbon Campaign is a means to start the conversation in our community to challenge everyone to speak out, and think about their own personal beliefs, language and actions,” said Mandol.

Below is a transcript Afaun Mandol’s talk at the ‘What Makes A Man. Higher Unlearning: The 2012 White Ribbon Conference.’ 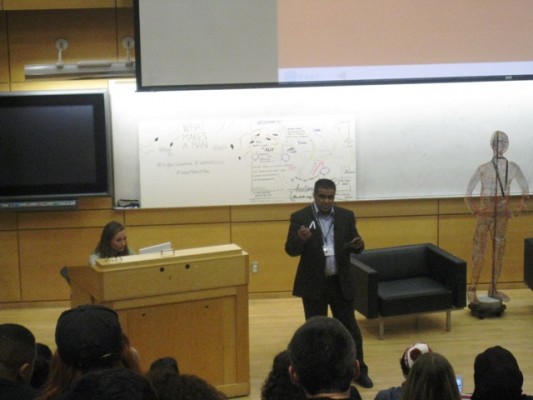 First of all I would like to thank Jeff Perera for inviting Muslim Presence to attend this great event and also for giving us the opportunity to meet and learn from all of you.

I think this is very beneficial to us and hopefully to you.

In the next few minutes I am going to touch on 3 main points:

1 – I’m going to touch on the diversity challenge within the Muslim community.

2 – I’ll speak on the “Call to Eradicate Domestic Violence” Campaign that is currently underway and how it was sparked from the Shafia murder trial.

3 – What are plans are for the future, and how we plan to move the message forward.

My family immigrated to Canada from Guyana, South America when I was just a year old.  So I am Canadian. I’ve been saying that much longer than Molsons.

Growing up in Canada, I’ve learned that culture and religion are two different things.

But I don’t think this is common knowledge to most people; many people can’t differentiate between culture and religion, and this, in my opinion, can be dangerous.

I think for those who follow any faith need to ask themselves: Is what I am doing part of my cultural practice or my religious practice?

I have had people tell me the two cannot be separated; I think they need to be.

I think the Shafia case is a prime example of this.  People are confused, even some who are Muslim.  This needs to be addressed.

And I think the media makes the same mistake; when the media speaks of Muslims, there is a feeling that we are all the same or they try to separate us out as progressive and traditional, but it’s not that simple.

Are Americans and Canadians culturally the same?  Canadians and Russians, the Chinese? The French?  Africans?

Yet, all of these places have large numbers of Muslims.

We want to show that the teachings and principles of Islam, which transcend culture, are completely in line with ending domestic violence and eradicating violence against women.

Let me give you some examples.

If we look at the pledge of the White Ribbon Campaign, to never commit, condone, or remain silent about violence against women and look at this verse from the Quran we start to see a correlation

“O ye who believe! stand out firmly for justice, as witnesses to God, even as against yourselves, or your parents, or your kin, and whether it be (against) rich or poor: for God can best protect both. Follow not the lusts (of your hearts), lest ye swerve, and if ye distort (justice) or decline to do justice, verily God is well- acquainted with all that ye do.” – basically saying you will be held accountable.

The Shafia case for the Muslim community was our Marc Lepine moment – we feel it has been a tipping point and galvanized the community.

Honor based killings have nothing to do with Islam.

But as I mentioned, some are confused between misogynistic cultural practices and their faith.

This event triggered an awareness campaign to empower men and women to take up their responsibility and step forward and be proactive in helping society as a whole stamp out this problem.

This brings us to the second point: The Eradication of Domestic Violence Campaign which was launched in early December strongly condemning all forms of domestic violence.

The declaration was sent to Mosques and Islamic organizations right across Canada and, as a result, a number of initiatives were kicked off after the recipients signed the declaration:

Future initiatives of the Muslim Presence Network: we want to work with other groups in this arena to learn from them as well as help them.

We are working with our Ottawa chapter and a group in Montreal in planning more White Ribbon Days to move this message along.

We are also currently in the initial phases of putting together a nation-wide website on domestic violence that would bring community resources from across the country together and become the premier  place for information on where to get help for yourself, how to help others, and remind us how our Islamic faith denounces domestic violence as a whole. 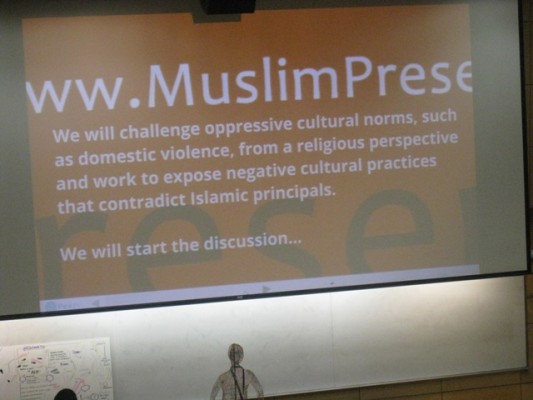 We will challenge cultural norms from a religious perspective and work to expose cultural practices that contradict Islamic principles.

In closing, from thinking back about the Muslim community’s diversity challenge, the Eradication Campaign, and our future goals – you can see there is much to do.

Thank you for your time today.