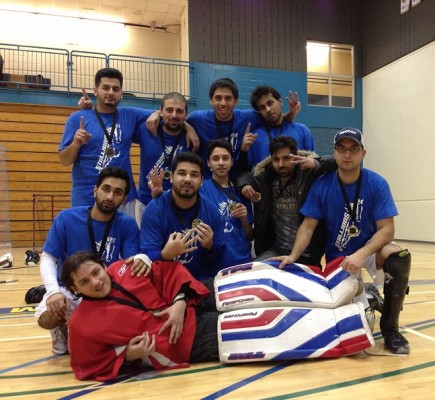 The mainly bi-annual tournament is a volunteer-driven, non-profit event that has been a longstanding tradition for members of the Montreal Muslim community.

It had humble beginnings in 1992 with five teams at the NDG YMCA and has continued to grow since, now regularly attracting up to 20 teams and around 200 Muslim youth and adults, typically aged 15 to 45, from different parts of Quebec, Ontario, as well as other parts of Canada and the United States.

On some occasions, participants have come from as far as the United Kingdom and the United Arab Emirates.

It remains the oldest and longest-running Muslim ball hockey tournament not only in Canada but the world.

The MMBH Tournament attracts visitors to Montreal and, in so doing, contributes to the local economy.

It serves to highlight the beautiful city of Montreal in its rightful place as the Mecca of hockey, no pun intended.

Additionally, it is an effective mechanism to showcase the successful integration of Canadian Muslims, a large, vibrant and diverse community whose contributions to Canadian society date back to before Confederation.

The MMBH Tournament also allows new Muslim immigrants to partake in a variation of Canada’s national sport.Participants interact with other Canadian Muslims and learn to enjoy and become passionate about hockey in a safe, positive, affordable and healthy environment.

While the tournament is typical in many ways to any other in Canada in terms of intensity, competitiveness and quality of play, what sets it apart is the atmosphere of sportsmanship it offers for participants; there is zero tolerance for overly aggressive behaviour and standard hockey rules have a unique addition of no swearing or vulgar talk being permitted (violating this rule can incur a hefty penalty).

Also, there are universal breaks that allow participants to perform their obligatory daily prayers in congregation together, and often guest speakers, who usually motivate participants to exemplify the Islamic faith by helping their fellow citizens, engaging in charitable work and contributing back to the community and Canada as a whole.

As much as it is a community sporting event, the MMBH Tournament also serves as an excellent platform for social and business interaction, with Muslim participants coming from diverse backgrounds: anglophones, francophones and allophones, ranging between first and second generation Canadians from over two dozen countries around the world to those whose ancestors have been in Canada since the earliest European settlers.

Participants are equally diverse in their professional responsibilities, and include doctors, engineers, lawyers, accountants, scientists, teachers, Imams and other theologians, entrepreneurs, bureaucrats, bankers, carpenters, students and others; all are able to connect and network with each other.

It is not uncommon to see friendships develop and business relationships establish and thrive through exchanges at the tournament.

As well, affordable corporate sponsorship packages provide an excellent forum for business visibility and marketing opportunities to a niche market.

Sponsors tend to be as diverse as the participants, from eateries such as Metro Pizza to product lost and found experts, ReturnMoi.

The MMBH Tournament also serves as a humanitarian tool for charitable work, both locally and abroad, and presents the combined generous nature of Canada and the Islamic faith.

Funds raised at the event are used to engage in international development work in the fields of health, hygiene and education for the betterment of needy populations abroad.

As a local example, this past 35th edition of the tournament collected and delivered close to 350 non-perishable food items to Sun Youth, in an attempt to alleviate their widely reported food shortage.

Much like its predecessors, the 35th MMBH Tournament featured many exciting and surprising moments, notably the shocking elimination of the top team, Slap you in the Face(off), by the underdog Black Reapers in the quarterfinals, as well as the Stallions winning the championship over the defending champions, Wipers, by a score of 3-2, the winning goal scored by defenceman Ammar Zaheer with 3 seconds left in the game.

“The feeling is indescribable, knowing you just scored the tournament winner”, said Zaheer, “our guys worked so hard all day, they deserved a championship and I felt on Cloud Nine because I was able to get it for them.”

Teammate Sheryar Qadoos was as enthusiastic in talking about winning his first championship: “I’ve been playing in these amazing tournaments for quite a while now and I never thought I would be able to win a championship because of the strong competition Muslims all over Quebec, Ontario and elsewhere bring to this excellent event. It feels incredible to win and be crowned champion of this amazing charity tournament!”

Other participants shared their thoughts about the MMBH Tournament; Ijaz Mohmand of Cornwall (Ontario), said “I really enjoy the tournament because it’s so well organized, great hockey, and most importantly it’s for such a good cause.”

Australia-born Montreal Canadiens fan Imran Lakhani, who now calls Ottawa home, echoed similar thoughts: “It’s pretty amazing to see that the tournaments have been successful through all these years.  For me, the best thing about it all is that everyone can get together to play the sport they love and yet benefit those in need at the same time.”

Arssal Shahabuddin, a long-time participant who ranks third in tournament history with 9 championships, focused more on the intangibles, saying “The tournament is fun but aside from the entertainment and athletic aspects, I consider it a stepping stone to bring people together for the truly important community work.  Events like these serve as platforms to engender affection between each other so when we gather together to serve our community, and by extension our Creator, we will able to do so without problems.”

Riaz Lasania, when asked about his role as one of the Directors of the tournament, stated “I help organize these tournament to get people together, come out and have fun in a Muslim environment and for a good cause.  It’s great to see the competition and sportsmanship and also parity, especially in the last few tournaments, and seeing supposedly weaker teams upset higher ranked teams always makes the tournament exciting.”

For all of its efforts over the past two decades, the MMBH Tournament has received congratulations and recognition from multiple Members of Parliament and community leaders.

As the MMBH Tournament continues its well-established tradition, the hope remains that future editions of the event will successfully uphold the legacy of bringing people together on three core aspects of their identity: Canadian, Muslim and insatiable love for hockey.

Shujaat Wasty is the Chief Organizer and Commissioner of the MMBH Tournament.  For more information, please refer to the website: http://mmbh.ca.