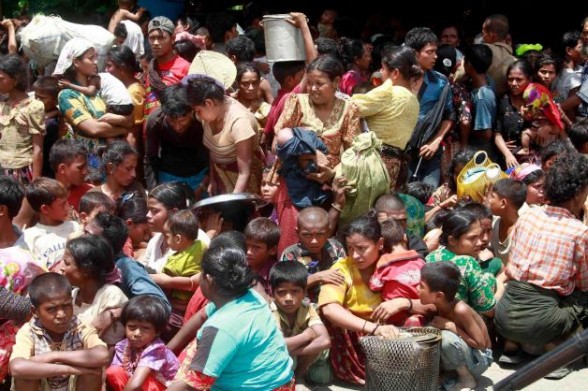 The genocide of Muslims in Myanmar, also known as Burma, is neither new nor an isolated horror story.

Institutional bigotry and racism is entrenched in the history of this country. During World War II, Muslims referred to as Rohingyas remained loyal to British and paid dearly for their choice.

After gaining independence in1945 from Britain, Burma systematically barred Muslims from entering the armed forces and they were gradually replaced in civil and police services by the Buddhists.

In 1958, Buddhism was declared as official religion of Burma and it was the beginning of Muslim persecution at the hands of extremist Buddhists who carried out acts of violence against them by violating their women, burning properties and killing them indiscriminately at regular intervals with security forces, according to the Human Rights group, looking the other way.

Tomas Ojea Quintana, the UN’s special rapporteur on human rights in Burma urged the government to tackle the “root cause” of discrimination against Muslim Rohingyas which pose a threat to Burma’s democratic transition and stability.

Last year’s election brought a civilian government to power and we have been led to believe that a happy ending is now in the making.

So far, opposition leader Aung San Suu Kyi is staying on the fence – as if the slaughter of the Rohingyas is not a priority.

Ironically, days after receiving Nobel peace prize, Suu Kyi told reporters she “did not know” if Rohingya were “Burmese”.

By not speaking out against the persecution of her country’s minorities she is condoning the very military oppression she has spent years fighting against.

Instead of calling the member countries of the Organization of Islamic Cooperation (OIC) to take concrete actions against Burma, Secretary General Ekmeleddin Ihsanoglu issued a pathetic statement calling Aung San Suu Kyi to do ‘something, anything’ (Al- Ahram July 25).

This shameless apathy displayed by OIC and its members is devoid of any moral fibre.

Since US Secretary of State Hillary Clinton made her ‘historic’ visit to Burma in December 2011, a recurring media theme has been ‘Burma riches’ and the ‘race for Burma’.

Little else is being discussed, and certainly not minority rights. Burma is blessed with ample resources of hydro-carbons, minerals, gems and timber, not to mention cheap labour force that has generated huge interest among the US and British multi nationals, including China and India.

Burma’s President Thein Sein, who is now being branded as another success story for US diplomacy is guilty of much greater sins, for he is providing a dangerous political discourse that could possibly lead to more killings, or even genocide.

The ‘reformist’ president told the UN that “refugee camps or deportation is the solution for nearly a million Rohingya Muslims,” He offered to send the Rohingyas away “if any third country would accept them.”

When asked about reports of ethnic cleansing against the Muslim minority in Burma, Foreign Affairs Minister John Baird said; “I registered our significant concern and encouraged them to use restraint and to seek to resolve the issue peacefully.”

Critics have called it a muted response at a time when Canada could put pressure on Thein Sein’s civilian government that failed to protect human rights and the lives of its minorities after decades of brutal army rule.

The plight of Muslims in Burma is conspicuously absent on the international scene or is it dizzied by the country’s “ample resources of hydro-carbons, minerals, gems and timber?

In a veiled criticism of the U.S and European Union which praised the government for its handling of the unrest, Asia director at Human Rights Watch, Brad Adams said the international community had been “blinded by a romantic narrative of sweeping change” in Burma.

And where is Dalai Lama and his pious platitudes about peace and tolerance while Buddhist extremists are on a killing rampage?

The US and its western allies, which keep pontificating about human rights in the world have pretended ignorance about this humanitarian catastrophe.

Because of their interest in ‘sharing’ the riches of the new found wealth in Burma.

Javed Akbar is a freelance writer and can be reached at mjavedakbar@gmail.com