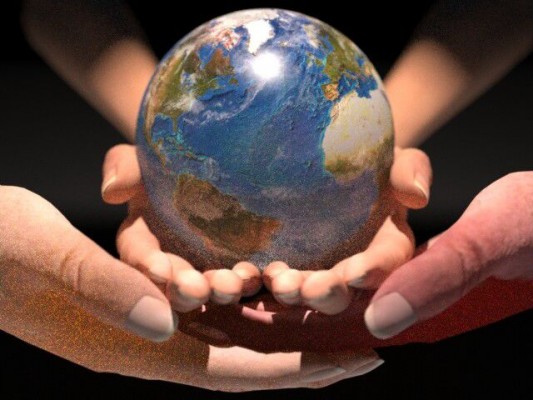 In June, at the 2nd Ibero-American Interreligious Summit in Barcelona, religious leaders from Latin America, Spain and Portugal exhorted member states “to admit the ethical origin of the present crisis and to support and respect the efforts of the religious communities in alleviating an increase in poverty as a result of the crisis.”

Religious leaders of diverse religious faiths are looking at the global economic crisis and positing that greed plays a significant role in it.

This shared concern brings a new frame to interfaith dialogue, since solidarity towards those in need is a common element rooted in all world religions. A more ethical, merciful economy is needed, and men and women of faith – including imams, pastors, priests, rabbis, Buddhist monks and Catholic nuns – seem increasingly determined to make their voices heard.

Religious leaders at the Ibero-American Interreligious Summit recommended that political leaders of their respective countries “protect the dignity of every human being in the construction of the public policies to address the present financial and economic crisis, and to overcome poverty and inequality”. And they issued a reminder of the need to remain committed to the UN Millennium Development Goals for 2015, which include fighting poverty, “without using the present situation of crisis as an excuse to defer their achievement”.

This topic has become of increasing importance in interfaith dialogue. An interreligious conference organised by the conservative European People’s Party (EPP) last November in Esztergom, Hungary reflected on the role of religion and religious institutions in tackling the financial crisis.

In their final document, the 100 delegates argued that “the reasons behind the economic problems are two-fold: the market economy is not social and ecological enough, and the current institutions do not yet have the necessary instruments to react adequately to globalisation. The so-called anti-crisis measures that seek to boost economic growth may deepen inequalities and worsen environmental conditions in the long-term.”

While many nations are desperately seeking practical strategies to find a way out of this crisis, religious leaders feel that they can contribute from a social and religious perspective to a debate taking place worldwide. From their point of view, morality is at the root of the global financial crisis, and morality is a domain where they feel entitled to speak out.

Religious leaders do not intend to offer economic theories, but some of their proposals reflect existing models of economic development and sustainable growth. For instance, those gathered at Esztergom, who were mostly Christian and Jewish, invoked the social market economy model so dear to German Christian Democrats. The social market economy model is a system in which industry and trade are run by private companies but within limits set by national governments to guarantee equal opportunities and social and environmental responsibility.

In other parts of the world, other economic models have been brought to the attention of governments and civil society. Muslim scholars at the Doha International Center for Interfaith Dialogue – which hosts an annual interreligious meeting in Qatar – argued in a 2009 meeting that Islamic finance could be a tool not only to solve the current crisis, but also to prevent further failures of the global monetary system.

After 1,400 years of practice, Islamic rules of business are usually conservative in their approach to risk and, with a clear moral code behind them, could offer a form of security that market-driven capitalism seems unable to offer anymore. Many non-Muslim thinkers have praised these mechanisms.

A common interfaith effort may become a powerful tool for cooperation in support of solutions to the financial crisis. Although some religious institutions and political parties have also fallen into the greed trap, world religions share a profound belief that the human being is the main value at the centre of the economy. They should be allowed a voice in the design of new principles for economic growth.

* Barcelona-based author Maria-Paz Lopez is Senior Religion Writer at the Spanish daily La Vanguardia and chairs the steering committee of the International Association of Religion Journalists (IARJ). This article was written for the Common Ground News Service (CGNews).