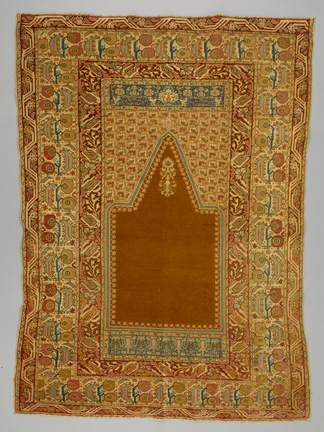 Exhibition Overview
An important element of worship within the Islamic world, the prayer rug is a powerful expression of worldview, integrating local aesthetics and materials as well as textile practices shared across centuries and generations of weavers.
As part of daily life within Muslim cultures, the prayer rug is used several times a day, offering a clean and sanctified space in both material and representational form. Each has intricate and powerful symbolic meaning, enacting a transcendent space isolated from the profane world in which to concentrate in prayer.
Connecting the individual to the realm of the sacred, the prayer rug’s design embodies architectural details – niches and arches which represent directional points to orient the worshipper towards Mecca.
Through this symbolism, the prayer rug functions in effect as a portable mosque, fusing personal with collective experiences as well as physical and sacred spaces.
The exhibition presents characteristic examples of prayer rugs from Afghanistan, Azerbaijan, India, Iran and Turkey, exploring over a century of symbolism and the meaning of motifs and compositions through nuances of local practices of rug production in this region.
Exhibition Content
Iran – Afghanistan
A selection of rugs in the exhibition were made in Iran and Afghanistan by the Baluch, a large amalgamation of tribal groups of Persian origin. They inhabit arid lands of southern Turkmenistan, northeastern Iran, western Afghanistan and northwestern Pakistan.
Predominantly nomadic, the Baluch wove rugs and bags to construct and furnish their tents and to adorn animals, and rug-weaving skills were deeply embedded in their life.
Rugs made in different areas differ in design and weaving techniques but have common features that allow us to identify them as Baluch. They also bear a resemblance to the rugs of the Turkmen nomads who live near‐by.
Azerbaijan
Caucasian prayer rugs known for their vivid colours and dynamic compositions make a distinctive group among Oriental rugs.
Most of them come from Azerbaijan, a country in the northeast part of the Caucasus that stretches along the Caspian Sea.
Being in close proximity to Iran, it experienced its strong cultural influence. Islam was established there in the first millennium of CE and is represented mainly by the Shi’a branch.
Turkey
Prayer rugs have been an integral part of Turkish rug production.
While those in this exhibition share common features, distinct styles, composition and patterns emerged in various regions of the Anatolian plateau, the historic landscape of the Ottoman Empire that constitutes modern-day Turkey.
In western Anatolia rug production was a significant part of a commercial nature. Central Anatolia was home to numerous migrating tribes who continued making rugs to construct and furnish their portable dwellings and occasionally to sell.
Eastern Anatolia had a broad, multiethnic population involved in rug production.
Large communities of Armenians contributed significantly to the weaving traditions in this region, bringing a dramatic Caucasian palette and distinct patterns into the mix of local images and colours.
Flatwoven rugs were especially widespread in this region.