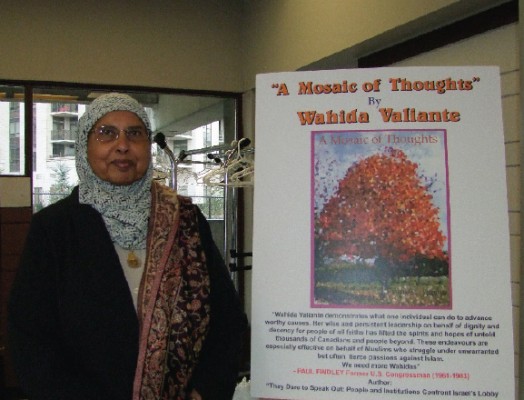 After serving as founding national Chair of Islamic History Month Canada since its inception in 2007, and being in the forefront of its genesis before that, Wahida Valiante announced this past summer that she is stepping down this month at the completion of the 6th annual IHMC events.

Wahida’s indomitable presence – her energy, optimism, inspiration and faith – has led thousands of Canadians from all religious and cultural backgrounds to discover and share the rich legacy and future of Islamic contributions to human history and civilization.

Having made such a profound contribution, she could not be contained in a simple “retirement” announcement, so for FM readers and friends, she graciously agreed to be electronically interviewed by CIC staff writer Pauline Finch. We hope you will all wish her well as she continues her work as activist, author and mentor.

• How long have you been National Chair of Islamic History Month Canada?

I have been with IHMC since 2007, its very beginning as a public event. This is the sixth year of my stewardship; the time has gone fast, so much has happened.

• How long before 2007 were plans for IHMC being considered?

The idea was actually floating around for some time; we always thought it was something positive to do “some day.” But then 9/11 happened, and as so many others have said our world “changed forever.” The negative backlash that followed 9/11, and so many “spin-off” crises in the years following it, made our goal of launching IHMC in that decade crystal clear.

It was a major wake-up call; we realized as never before that most Canadians – even though we are officially a “multicultural” nation – had no idea of what Islam really means. They were being fed media and populist information based on ignorance, misinformation, entertainment industry stereotyping, and fear-driven reaction by hate-mongers with their own agendas.

We knew that IHMC could build a better way, as was so eloquently expressed by the Hon. Mauril Bélanger, (PC, MP for Ottawa-Vanier) at the passing of his motion in the House of Commons on Oct 25 2007:
“I encourage cultural exchanges between Canada’s diverse communities, which make us a vibrant and dynamic society. I believe that by having a better understanding of our fellow Canadians from various communities and backgrounds that we will achieve a stronger and more cohesive country.”

• Are there any highlights from individual years that you feel are particularly memorable?

There are so many, I could not name them all … In fact, every one of the past six years has been memorable because IHMC has grown steadily in stature and popularity. Even from the very first year, we knew this venture was making a positive difference in every event we held, large or small.

Every year since 2007, more individuals, organizations, schools, community groups – Muslim and non-Muslim – have joined in our annual October celebrations. Additionally, we received the endorsement and participation of a number of Canadian cities, libraries, and community programs. And in 2011 the Toronto District School Board, Canada’s largest, featured IHMC and our grade-appropriate student resources on its official website.

However, there is one moment that stands out for me above all others. That was October 25, 2007 when as the newly-minted chair, I witnessed the launch of IHMC in Parliament, accompanied by distinguished senators, Hugh Segal and Mobina Jaffer. I still remember how excited and nervous I felt as I took the microphone; you could feel the sense of history being made on so many fronts.

• How has CIC’s support helped to make IHMC a success?

CIC has been invaluable because it had the reach in our community to bring together people of vision, Muslim and non-Muslim alike. We gathered academics, politicians from all parties, community leaders, and those who keenly felt the need to promote informed dialogue, rather than let the media perpetuate negative images of Islam and Muslims. It was an amazing experience to see so many dedicated Canadians of diverse religious and cultural backgrounds coming together through CIC to make this venture happen.

• Do you have a future “vision” of what you hope IHMC will be like in coming years?

Yes indeed. It has taken six years to firmly establish it as a permanent and widely respected component in Canada’s multicultural calendar and it has done so “under the wings,” so to speak, of the CIC. But now I believe it is the right time to set up Islamic History Month Canada as an independent stand-alone learning institute, whose present and future focus should be on research, education, public lectures, presentations, books, and national dialogue. IMHC has already been federally registered as a non-profit educational institute. Now it is ready to go to the next level of development.

But I personally want to go even further, and see IHMC celebrated throughout the year rather than during just one month. As a permanent institute, IHMC could provide year-round resources and educational materials to support many community activities. We have already produced a set of bilingual (English and French) teaching booklets for Grades 1-10, to assist teachers in public and Muslim schools with discussions about Islam; and they are being successfully used.

Furthermore, I believe we should not only focus on the glories and tragedies of our past, but also look to the future and involve many more Muslim Canadians in the numerous ways that humanity can be enriched through science, medicine, art, psychology, sociology and so many fields of endeavour. Our young people are highly motivated and are gaining a better understanding of their faith and of their role as Canadians. They will be ours and Canada’s greatest asset in years to come.

So my “vision” is that IHMC as an institution will continue to benefit both our Muslim community and Canadian society as a whole. After all, the Qur’an itself promotes acquisition of knowledge for the betterment of humanity, and not for destroying it.

• What do you see as the main challenges for the continuance of IHMC?

Without a doubt, we are like many Muslim organizations continually facing the twin challenges of inadequate financial resources and lack of community support. For a project like IHMC to sustain itself over the long term, we need to generate steady income in addition to donations and fund-raising events.

My years on the front lines of CIC and IHMC have taught me in a very hands-on way that our Canadian Muslim community needs to be involved from the grassroots. But this is a most formidable challenge, for it means convincing a national community of more than 800,000 people that building mosques alone (as worthy as they are in themselves) does not help create a bigger and more proactive presence in the current political and social situation. If anything, retreating into the mosque and closing its doors to non-Muslim communities can lead only to a deteriorating profile in Canadian society.

Similarly, my Muslim sisters need to be involved from the grassroots. They make up nearly fifty percent of our community, yet they are sadly missing both in leadership roles within Muslim organizations and in the volunteer sector of society as a whole. For the success of a project like IHMC, they must claim bigger roles in both these areas.
We have a great task ahead of us – one that can only be accomplished if the images of Islam and Canadian Muslims matter to all of us.

•Are there any non-official ways in which you plan to stay connected with IHMC?

I would most probably act as an advisor, or as a community educator/ambassador on behalf of IHMC. At this point it is difficult to predict, as much will depend on the new leadership.

Reflecting over my life in Canada, since the mid 1960s I have devoted more than 40 years to giving back to the community – Muslim and non-Muslim – and it has been rewarding in so many ways that I find it really difficult to capture and express it all. But one thing I can say with my whole heart; I do not regret any of it! My advice to all our Muslim sisters, brothers, nieces and nephews, and our non-Muslim friends and supporters everywhere is: make giving back to society an integral part of your life’s work. Remember, we are constantly reminded by the Qur’an to do good and ultimately, that is what counts.