Green Party leader, Elizabeth May, told a recent gathering of faith communities that their moral voices must be loud on climate change and other environmental issues.

“The moral voice needs to be loud and not marginalized,” she said. “We tend to deal with climate change as an environmental, economic, scientific or technological issue, but how often do we deal with it as a moral issue.”

May made the remarks while delivering the keynote address at the Green Awakening Network (GAN) and Greening Sacred Spaces (GSS) Fourth Annual Forum, “Green Choices for Faith Communities“, held at the Noor Cultural Centre in Don Mills on Sunday, March 25, 2012.

May stressed that the climate change crisis requires that political partisanship be put aside in favor of cooperation.

In her welcoming remarks, the President of the Noor Cultural Centre, Samira Kanji, told the gathering that the Centre is a place for learning and the celebration of culture, while respecting the diversity in peoples and religions as directed by the Qur’anic verse, “We have created you male and female, and have made you into nations and tribes, in order that you might come to know one another.”

The two sponsoring groups, Green Awakening Network and Greening Sacred Spaces, said that the purpose of the forum was for faith communities from the Greater Toronto Area to come together for ‘a day of inspiration and practical help’, especially those ‘wishing to seriously take their commitment to ‘live with integrity’ in creation.’

The forum included a series of six workshops in three tracts – Eco-Justice, Eco-Spirituality and Eco-Practice – as well as, displays from vendors offering environmental products and services.

Two churches were recognized with the Greening Sacred Spaces Awards for their efforts to green their congregations.

In the workshop on Reconnecting with the Heart & Spirit: Pathways and Experiences, Dr Mishka Lysack, an assistant professor at the University of Calgary, looked at ways for those passionate about eco-justice to sustain their work and ongoing engagement.

“One of the more promising ways of encouraging environmental citizenship lies in cultivating the growth of biophilia, what the Harvard biologist, E.O. Wilson, calls the innate ‘urge to affiliate with other forms of life,’” said Professor Lysack.

He noted that signs of biophilia are found in a human’s love of life, “Think of a child who is irresistibly drawn to an animal or stories that are filled with animal characters or plants or natural landscapes.” 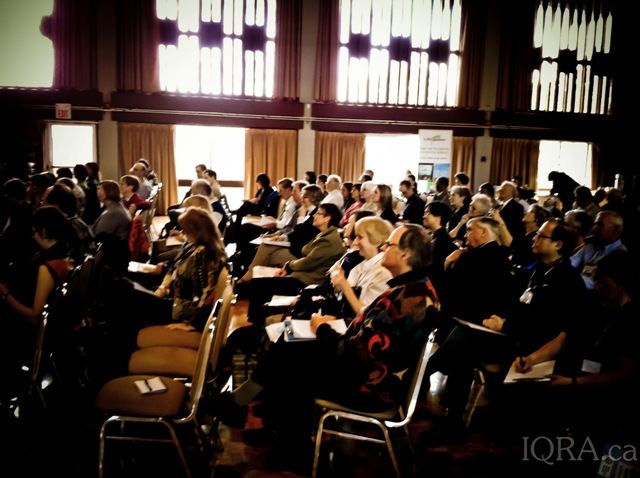 The Alberta tar sands, its impact on the environment and rights of Indigenous Peoples, were highlighted in this session.

“We are at another moment in our history where we need to re-establish out treaty obligations with Indigenous Peoples,” said John Dillon.

This sense of being at a pivotal juncture with regards to environmental stewardship, and drawing from history and values to respond to the climate crisis, was a common thread through the afternoon’s proceedings.

In her keynote address, Elizabeth May asked the audience to reflect on the common values and characteristics that have defined Canada.

Quoting Canadian author, John Ralston Saul, May described Canada as being underpinned by First Nation values, and influenced by the wilderness and sense of collectivism.

“Canada is about taking care of each other and not about selfish individualism,” she said.

The Green Awakening Network (GAN) is a group of congregations of the United Church of Canada in the City of Toronto that come together to share ideas and experiences, in partnership with others, on how to respond to the challenge of climate change and how to reduce our “carbon footprint.”

“Our thanks go to the forum’s gracious hosts at the Noor Centre; to the presenters, exhibitors and volunteers who generously contributed their time and energy and to the participants whose enthusiasm and critical perspectives made the forum a success,” GAN-GSS said in its post-event press release. 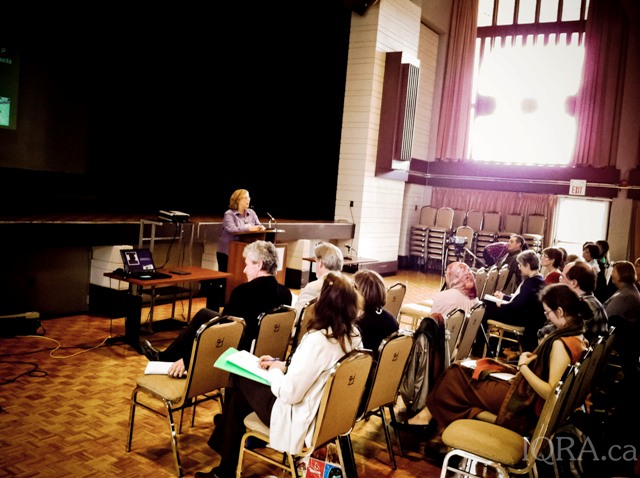