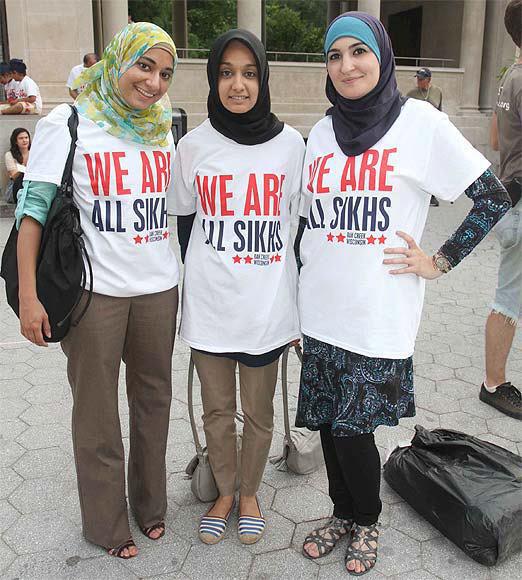 The shooting that left six worshipers dead at a Sikh temple in Oak Creek, Wisconsin last month altered my perspective on the effects of hate speech in American society. After 9/11, fear of Muslims and those who appear to be Muslim increased – and sadly, some Sikh Americans experienced violence and bigotry. While this has been acknowledged, until August it received far less attention than it deserves.

As Muslims, we find ourselves in a particularly unique position after the shootings in Wisconsin. Though the situation of Muslims and Sikhs in America is far from identical, we have many similar experiences of being seen as “other”. We should draw on these experiences to work together toward a future in which all faith groups in America feel secure.

The shootings happened to fall in the month of Ramadan. If you visit any mosque at night during Ramadan, you will find hundreds of Muslims at prayer. Some media commentators suggested that the shooter could have in fact been targeting Muslims, which prompted me to ask: how would the aftermath have been different if the victims were Muslim?

I hope the answer is that nothing would have been different, and that regardless of who the victims were or who the murderer was, the response from all sectors would have been to condemn the causes of such violence and stand in solidarity with the victims. This solidarity was in fact what we saw following this tragedy, as individuals of many backgrounds stood up to support the Sikh community and condemn the violence.

Muslim experiences of interfaith solidarity, especially after the controversy about the so-called Ground-Zero mosque, make me confident that there would have been countless partners from all faiths standing together had Muslims been the victims of such an attack.

Muslim Americans have had to struggle with the fear and prejudice of others. Islamophobia has become an everyday word for many of us, especially those who work in faith-based organisations. I have mixed views about the term, and have always wanted my fellow Muslims to drop it and instead focus on positive, proactive work for the future. The fact remains, however, that Islamophobia is a real phenomenon with its own history; its victims are by no means limited to Muslims – as it also affects those who are perceived to be Muslim.

The Muslim community has, more or less, faced the issue of Islamophobia head on. The report Fear, Inc: The Roots of Islamophobia Network in America by the progressive think tank Center for American Progress has exposed the $42 million machine of division and hatred targeting Islam.

But what have we really learned from the success of this campaign? Unfortunately the funding and strategic agenda that organised behind the cause of division have not been opposed with a mechanism to bring people together around a forward-looking agenda. What have we learned from a decade of communal blame that we can now bring to the table?

It is time that we move forward and provide real impact and value to the discourse on tolerance, overcoming prejudice through our experiences. As Muslims, we must remember that people of all faiths have joined us, and at times led us, in the cause of coexistence and engagement. For instance, comparative discussions on Islamic and Jewish law became quite common after legislation implicitly or explicitly aiming to ban sharia was put forward in several states.

Groups who have been discriminated against in the past, among them Irish Catholics and Jews, have spoken up for Muslim Americans, demonstrating both empathy and solidarity. We’ve experienced a warm embrace from so many, but a xenophobic culture still exists in our society, and the shootings at Oak Creek are a brutal reminder of that.

Immediately after the shooting, statements of support and condolences came from all national Muslim organisations. The Muslim Public Affairs Council was a leader in standing with the Sikh American community, visiting the Sikh community at Oak Creek, convening a national conference call on the tragedy and participating in a recent panel discussion on extremism in America at the New America Foundation. Muslim thought and civic leaders have been promoting this solidarity through their available platforms and through the media.

Still, have we done enough? Muslims have a big responsibility to be the leading religious community to build strong relationships with Sikhs. It is a moral responsibility to join together as a unified community standing up against the root causes of this trend of violence—misinformation, fear mongering, and hate speech.

On a deeper level, this is an opportunity for us, as Muslims, to give back what so many have given to us—friendship. It is an opportunity for us to “walk the talk” and live out the ethical values we speak about so often. Through this friendship we will join our communities around a shared goal, and begin working together to reach a secure future for all faiths in our society.

* Craig Phillips is an interfaith organiser based in the Washington, DC area. This article was written for the Common Ground News Service (CGNews).