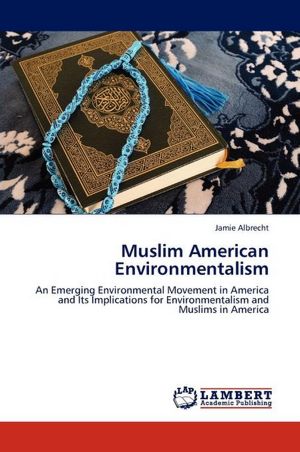 The Muslim-environmental movement has been gaining momentum in the United States over the last several years.  Mosques, organizations and institutions have gradually adopted environmental principles into their sermons, curriculums and operations in a unique intersection of religious beliefs and environmental activism. Until now there has not been a written account of this evolution or an evaluation of our community’s progress in this area.

ht in her recent book entitled “Muslim American Environmentalism,” aims to examine how Muslims in their everyday lives in the United States experience and participate in the environmental movement. It is believed that there is a distinct Islamic understanding of the natural environment which translates into different levels of activism within the community.

This research area is important for several reasons including contributing towards the American response to global climate change and its inclusion of the Muslim community. It also addresses relevant topics that are just emerging such as Muslim activism within the United States, the role of the environment in Islam and the fusion of religion and environmentalism.

Three issues were examined as part of this research: 1) To address the contemporary Muslim understanding of environmental stewardship in the United States, 2) To determine the Muslim American role in the environmental movement through their practices and activities 3) The impact of this activism on the American Muslim political and social life as well as social inclusion within American society.

The book was divided into several sections; the first explored the role of ecology and environment in Islam through a review of the Quran and Sunnah. The second traced the historical account of environmentalism from the ecological roots of the Prophet Muhammad (PBUH) through its evolution to the current Muslim American community. As part of the research process, interviews were conducted to gauge the sense of eco-awareness within the community and environmental advocacy in the United States. This was followed by an analysis of these interviews to draw out conclusions to the initial research questions.

Overall, this book provided a comprehensive account of the progress Muslims have made in incorporating environmentalism as part of their faith. There were several case studies examined within the research that provided a glimpse into how different communities are approaching the current environmental crisis and how they are establishing their own environmental ethics based on the three divine sources within Islam; the Quran, Hadith and Sunnah.

message that left an impression with me was from Dr. Abdullah Omar Naseef, the contributor to the “Muslim Declaration on Nature.’ He describes three central concepts that form the basis of environmental ethics within Islam.

1)      Tawhid – The unity of Allah is reflected between the unity of mankind and its relationship with nature. There is a balance and harmony that exists in nature that must be maintained

2)      Khalifah – The responsibility of the humans as trustees of Allah over the planet. We are entrusted as stewards of the earth and its resources to use in a sustainable manner

3)      Akhirah – We will all be held accountable for our actions on and to the planet in the hereafter.

The simplicity of the message reminded me that we tend overcomplicate issues and many of the solutions start with having the right intentions. I would recommend this book to anyone interested in the Muslim contribution to the environmental movement or learning about ways you can make your community more sustainable.

* Muaz Nasir is a Muslim Canadian environmentalist and Publisher of the online environmental website,www.Khaleafa.com. He holds a Masters degree in Environmental Studies specializing in Business and Environmental Relations from York University and the Schulich School of Business; he aims to raise the profile of environmental issues within the Canadian Muslim community.