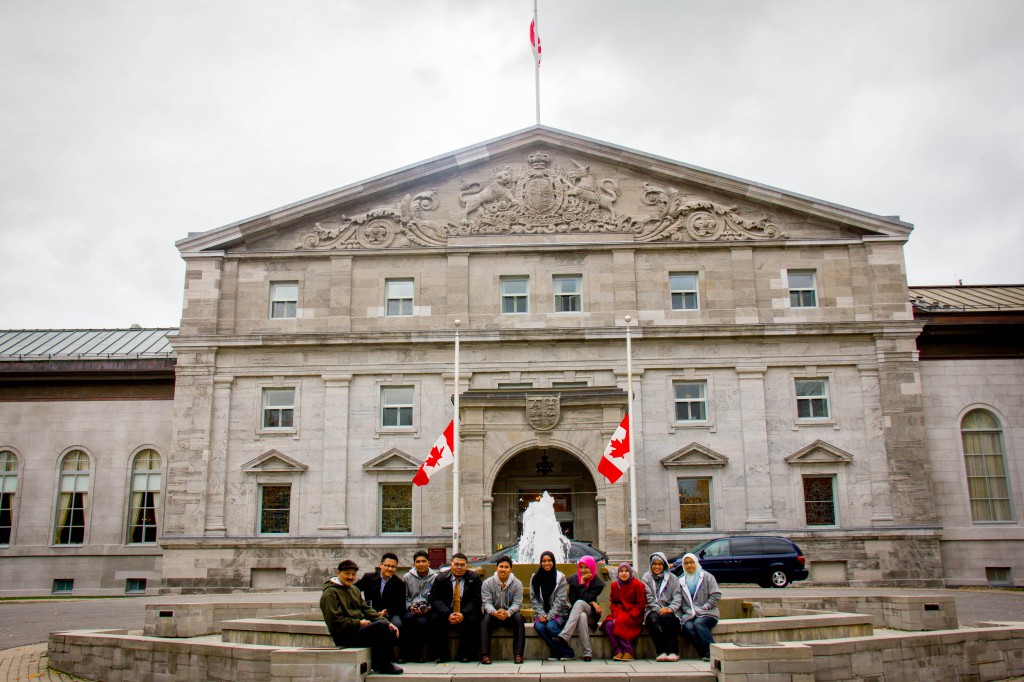 ‘Tak kenal maka tak cinta’ (you will never fall in love with someone until you get to know him).

Some might associate this Malay saying with love among people, but for me it is more than that.

This popular Malay saying is enough to describe my recent experiences – the beauty of Islam as the religion of all time, anywhere, through all means.

On the 18th October 2012, I was one of the luckiest students who took part in Student Exchange program between the Islamic Institute of Toronto (IIT) and my university, the International Islamic University of Malaysia (IIUM).

At first, I thought this would be a great getaway to escape from student life.

Spending mid-semester holidays with friends and celebrating Eidul Adha away from family sounded awesome at the time (blame it on my rebellious genes).

We started off our journey to the southern side of the world to explore and gain knowledge, for the sake of Allah.

Frankly speaking, I never expected more than just having fun.

During the meeting with the officers at IIUM before our departure, we were informed that there might be slight difficulties in terms of observing our prayers there, as well as performing our religious duties, because of the fact that we are visiting a non-Muslim country.

One of my friends even informed me that her parents would not allow her to bring a black Abaya and Hijab, afraid that we might be seen as the extremists.

However, as soon as we arrived in Canada, we totally changed our perception towards people there.

The bond among the Muslims there is as good as the bond between Muslims and non-Muslims.

How can I even say that? Here’s why.

During the 4th day of our visit, we were in the middle of visiting the Museum of Civilisation in Ottawa.

As we were wondering around appreciating the exhibits, it was time for Zuhr prayer.

As there was no Musalla or mosque around that area, we tried to find solutions in order to ease our journey but at the same time not neglecting our obligatory prayers.

One of the Museum staff approached us and asked if there were any difficulties.

After explaining to him our dilemma, he went to see his supervisor and 5 minutes later he came back and said, “You know what, you can pray here. We will open a conference room for you to perform your prayer. Just lock the door once you’re done.”

We were shocked and thanked him for the hospitality.

Yes, it was a conference room, far better than what we had expected.

The adventure did not end there.

During our visit to Niagara Falls (YES! Niagara Falls!), we had similar challenges with respect to performing our prayers.

After looking around for a suitable place to perform our prayers, we came across a spot in the middle of a park.

We started to form our saf in the middle of the park where people were kissing and making out, here and there.

We spent 15 minutes of our time there despite people looking at us in awe.

See, da’wa can be done in so many ways!

On the 10th day of our trip, we went out to buy stuff for our beloved families back home (talking about homesick, huh?! ).

During the journey, we heard a call of prayer from the volunteer’s cell phone and immediately she parked the car facing the Qibla and started performing her prayers.

After 30 seconds of amazement, we followed her.

See, no one can be excused from delaying their salat.

Despite having fun shopping for the families, they never use that reason as an excuse to delay performing prayers.

Some people might say that people who observe their Islamic teachings will never be a successful person here in this world, that is, in order to succeed in Hereafter, we have to sacrifice our position in this world.

No, it shouldn’t be that way.

One of our hosts in Toronto is a successful engineer, yet his children are huffaz (they have memorised Quran) and can recite Azan and al-Quran in very melodious and soothing rhythm.

They always get CGPA 4.0 throughout their studies and obey their parents very well.

My experiences during this exchange trip to Canada made me realize that we may be taking things for granted as we live in our comfort zone which can cause us to lose something very precious – our imaan and identity.

I will fondly remember this trip to Canada and will share these experiences with all.