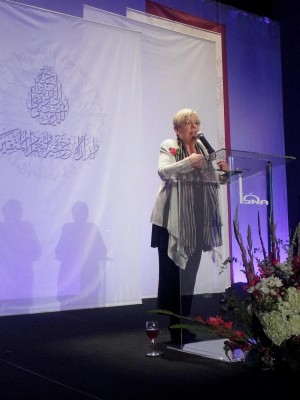 The Islamic Society of North America (ISNA), one of the largest Muslim organizations in North America, has been chosen to implement the Charter for Compassion.

“ISNA is leading the way in bringing compassion back to the center of the religious life and is a wonderful example to other religious traditions and institutions,” prominent scholar Karen Armstrong told OnIslam.net in exclusive statements.

The Charter for Compassion is a worldwide cooperative effort to restore not only compassionate thinking but also compassionate action to the center of religious, moral and political life.

“The Charter’s vision for a just and compassionate world deeply resonates with the message of the Qur’an and it is wonderful that Muslims are taking such a committed lead,” Armstrong said.

“If nothing else, this runs dramatically counter to the widespread, stereotypical view of Islam as a violent and intolerant faith.”

The Charter for Compassion is the result of Armstrong’s 2008 TED Prize wish, which was unveiled to the world on November 12, 2009.

“My inspiration for the Charter came from my work as an historian of religion,” Armstrong said.

She said the Charter was written by leading activists and thinkers representing six of the major world faiths.

“It was a sign that despite our differences, we could work together for a more just, equitable and compassionate world, in which all peoples, even so-called “enemies”, are treated as we would wish to be treated ourselves.

The choice of the umbrella Muslim group to implement the Charter of Compassion came during ISNA’s annual convention, which was held in Washington earlier this month.

“Up until now the major response to the Charter’s call for practical and realistic implementation of compassion has been secular,” Armstrong said.

“ISNA’s initiative is the first major religious response and that is very exciting to me.”

During the ISNA convention, the ADAMS Center (All Dulles Area Muslim Society) declared itself the first Compassionate Mosque and has called on other mosques around the country to do the same.

“Imam (Mohamed) Magid has declared the Adams Center in the Dulles area of Virginia a compassionate mosque, dedicated to gender equality, to cultivating good relations with other faith communities, and working for the welfare of the wider community,” Armstrong told OnIslam.net, referring to ISNA president.

“A compassionate mosque should be open to everybody.”

The ISNA leader has also called on mosques to build a vibrant network of compassionate Muslim communities throughout North America.

“He has also called for compassion to be central to the training of Imams and for the scholarly exploration of the specifically Islamic understanding of compassion, which can be a light to the world,” Armstrong said.

“Muslims need to take ownership of the Charter and interpret it in the light of their own tradition.

“ISNA is also piloting a network of compassionate schools and the members of MYNA, the youth wing of ISNA, have chosen to dedicate four of their Winter Camps to the study and implementation of the Charter for Compassion in Chicago, Texas, Ohio and Washington DC,” she said.