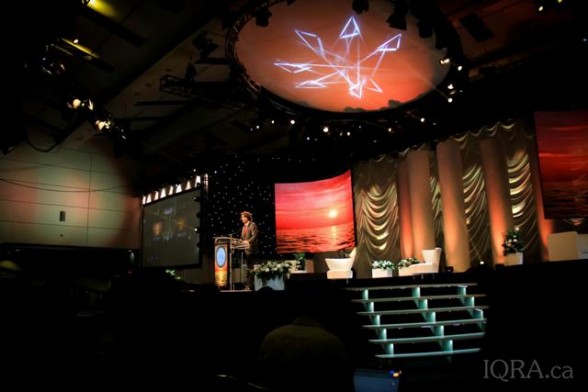 Federal MP, Justin Trudeau, told the Reviving the Islamic Spirit (RIS) Convention on Saturday that those who criticized his decision to speak at the convention are working to divide Canadians.

“As you know, some conservatives tried to stir up controversy about my appearance here today,” Justin Trudeau told the packed hall of over 20,000 people. “They tried to appeal to people’s fears and prejudices, the very things that this gathering was founded to overcome.”

Trudeau, who is the son of former Canadian Prime Minister Pierre Elliott Trudeau, is a Member of Parliament and is seeking the leadership of the Liberal Party of Canada.

“I want you to know that I will always stand up to the politics of division and fear. It is short-sighted to pit groups of Canadians against one another,” he said. “It may make some feel good for a little while, or even work politically in the short-term.”

Earlier this month, the Reviving the Islamic Spirit (RIS) event was attacked by Islamophobic blogs and other groups who took issue with one of the event’s sponsors, IRFAN-Canada, which had its charitable status revoked in 2011 over allegations that it was sending funds to Hamas.

Justin Trudeau, the leading candidate for the leadership of Canada’s Liberal party, was criticized for agreeing to address the conference because of these allegations.

IRFAN-Canada, which is a humanitarian relief organization, denies having any ties to Hamas which is considered a terrorist group by the Canadian government.

The relief organization is challenging the ruling that revoked its charitable status but decided last week to pull out of sponsoring the event to avoid creating further controversy.

“It is extremely unfortunate that this issue has threatened to detract from the many accomplishments of RIS in the last ten years.” said Fouzan Khan, a founder and director of RIS.

During his keynote address, the charismatic Trudeau urged the audience to reflect on the country’s diversity and peaceful history.

“We are all blessed to live in the most diverse country in the history of the world. One of the most peaceful and most prosperous,” he said.

Trudeau told the convention that Canada is a country that has moved beyond tolerance to understanding among its citizens.

“And while there are many places in the world where tolerance is still just a far-off dream, in Canada, we are beyond that,” he said. “So let us not use the word tolerance. Let us speak instead of acceptance, understanding, respect, and friendship.”

In the last ten years RIS has emerged as a major platform for some of the leading thinkers from around the world to address one of the largest assembly of Muslims in the western hemisphere.

“The conference has always been about uniting and joining hands with scholars, journalists, academics, representatives from other faiths, and artists to promote messages of peace and tolerance,” said RIS spokeswoman, Farhia Ahmed.

“The message at RIS conferences have helped counter extremism by offering a better understanding of the Islamic tradition in the modern context and this in turn has helped second and third generation Muslims make meaningful contributions as citizens while living a life of faith”, added Ahmed.

“When people come together to create opportunities for one another, the dreams we hold in common will crowd out the fears that would divide us,” he said. For it is not the political class, but the middle class, that unites this country. Open to all, our broad and diverse middle class is Canada’s centre of gravity. Good people. People with common hopes and common challenges, coming together to find common ground.”