[Speech Delivered by Justin Trudeau on the Occasion of the 11th Annual Reviving the Islamic Spirit Convention in Toronto on December 22, 2012]

I am here today because I believe in Freedom of Expression.

I am here today because I believe in Freedom of Peaceful Assembly.

I am here today because I believe in the Charter of Rights and Freedoms, which guarantees those sacred things to you, to me, and to all people with whom we share this land.

But mostly, I am here today because I believe in you.

I believe in the contributions you have made to our country. And I know that together we will make even greater contributions in the future.

Let me begin with a story. A story from your history. One that I hope will stay in your minds as you think about our common future.

Many generations ago, a young man was confronted by traditional religious elders. The kind of folks that today we might call fundamentalists or even extremists.

You see, a centuries-old conflict was raging. Prominent people on each side were convinced of their rightness. And loudly proclaimed that the other side was not only wrong, but wrong because of their religious beliefs, their culture, and their identity.

And as is far too often the case, these leaders reserved special scorn for those within their ranks who sought common ground with others. They understood the threat that moderation and compromise present to those who preach rigid doctrine.

This young man was struggling at the time. He was just starting out in the world. He was facing many of the same issues that, I suspect, you are facing today. How do I remain true to my values, to my culture, while I serve the interests of the society to which I belong?

He knew who he was, and what he believed. He was proud of his heritage, his culture, his religion. But he parted ways, decisively, with those within his community who would use these things to build walls.

But then, he was granted a remarkable opportunity, to address a distinguished audience of political, religious, and business leaders.

And so he challenged them to think beyond the narrow confines of the present and to look towards the future.

He said “Providence has united together on this corner of Earth populations of different origins and creeds. Is it not manifest that these populations must have together common and identical interests?”

That young man is a very important part of your history, as I said. But he would not go on to become an Imam, a holy man, or a Caliph.

He would, however, go on to become, among many more important things, my second-favourite Prime Minister.

The year was 1877. The place was Quebec City. And the brave young man’s name was Wilfrid Laurier.

He was 35 years old, with barely three years of service in Parliament to recommend him.

And he had made a difficult choice.

Rather than fall in line with his elders and marshal his already prodigious talents in exclusive service of what he called his race, he chose an improbable new path.

One that honoured what was good and noble about his own culture, yes. But one that used those very things to serve a higher purpose: to find common ground between people of differing beliefs.

Laurier saw something clearly, perhaps more clearly than any other Canadian; he saw that here, in this place, a new idea was taking shape. A new way of living together just might be possible.

He knew that his was a country founded and built by people who had warred against one another for centuries on their home continent: English vs French, Catholic vs Protestant. Early on, these murderous conflicts crossed the Atlantic Ocean with them.

But then a unique thing happened. Despite the fact that the English were victorious on the battlefield, the same measure of freedom was gained by each side.

In one of the most moving passages of that speech, speaking about the obelisk on the Plains of Abraham, Laurier said:

Now, the point of this story is not that remarkable moment in our history. The point is everything that has happened since.

This is our inheritance. One that has been renewed by successive generations to this very day.

That two peoples who had been enemies came together to build institutions — and a Constitution — that guaranteed freedom not only for one another, but for all who would come after them.

They were joined in this great project over the years by people of every conceivable culture, religion and ethnicity.

Waves and waves of young men and women who chose to emphasize what was kind-hearted about their own traditions. Free people who chose to use the generosity of spirit that is the root of all faith, to find common ground with those whose beliefs differed from their own.

As it is written in the Holy Qur’an:

‘The true servants of the Most Merciful are those who behave gently and with humility on earth, and whenever the foolish quarrel with them, they reply with [words of] peace.’
(al-Furqan 25: 63)

It has never been easy. This road has never been smooth or straight. Generations of Canadians had to overcome deep differences. They made a deliberate choice to turn their backs on rancour and conflict.

But today, because of them, we are all blessed to live in the most diverse country in the history of the world. One of the most peaceful and most prosperous.

One that has now moved beyond the goal of mere tolerance. Because saying “I tolerate you” is to grudgingly allow you to breathe the same air, to walk the same earth. And while there are many places in the world where tolerance is still just a far-off dream, in Canada, we are beyond that. So let us not use the word tolerance. Let us speak instead of acceptance, understanding, respect, and friendship.

This is our story now, yours and mine. The story of our country, Canada. 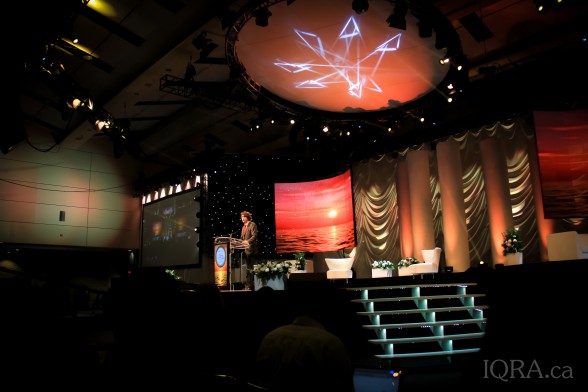 So as you reflect this weekend about the future, take heart. Know that the struggles we are facing have been faced down before. Know that the conflicting feelings in our hearts have been felt before. Know that compromise and moderation are not the path of weakness, but of courage and strength. That there is always a positive path in this country for all who seek common ground.

Most important, remember this: our inheritance must be constantly renewed by those who share Laurier’s vision.

When people come together to create opportunities for one another, the dreams we hold in common will crowd out the fears that would divide us.

For it is not the political class, but the middle class, that unites this country. Open to all, our broad and diverse middle class is Canada’s centre of gravity. Good people. People with common hopes and common challenges, coming together to find common ground.

There are already too many forces in the world that drive us into separate camps, that isolate us, and make us suspicious of one another.

Yesterday, protesters tried to prevent me from speaking at a school because of my stance defending gay marriage and women’s rights.

And as you know, some conservatives tried to stir up controversy about my appearance here today. They tried to appeal to people’s fears and prejudices, the very things that this gathering was founded to overcome.

Now, I respect and defend their right to express their opinions.

But, I want you to know that I will always stand up to the politics of division and fear. It is short-sighted to pit groups of Canadians against one another. It may make some feel good for a little while, or even work politically in the short-term.

But it is no way to build a country. Least of all this country. It is not who we are.

We are here today to do what we Canadians have been doing together for generations. We are honouring our diversity through friendship and understanding, so that we can build from it a common, positive future.

So I join you in your commitment to that more hopeful future. Let us pledge ourselves to building a country that brings people together; that finds the highest virtue in compromise, moderation, and common ground.

Nearly thirty years after that first speech, then in his third term as our Prime Minister, Laurier put it this way to an audience in Edmonton.

That was Laurier’s wish for us. And it is mine for you. Be hopeful and positive, my friends.

Your country needs you.

May peace, mercy, and blessings be upon you.