Muslim Youth at the Islamic Foundation in Scarborough have started a campaign to raise $100,000 for The Scarborough Hospital’s MRI Campaign.

The campaign dubbed ‘Give 2 Live’ will be officially launched on Friday, March 23rd at the Islamic Foundation of Toronto at 6:30 p.m.

“The ‘Give 2 Live’ campaign is a youth-based initiative on behalf of the Muslim community of the GTA,” Humairah Saeed, spokesperson for the campaign team, told IQRA. “The team aims to highlight our Islamic obligation to serve our community at large.”

The Scarborough Hospital (TSH) is Canada’s largest urban community hospital, serving a community of close to one million people or approximately one-third of the Greater Toronto Area.

The Scarborough Hospital’s two campuses serve one of the most diverse patient populations in Canada, including a large Muslim community.

“In addition to benefiting from the services of the healthcare system we value, Muslims are committed to strengthen it,” said Saeed. “Positive community integration is very important in Islam and it should be a priority for Muslim Canadians to work for the betterment of our society.” 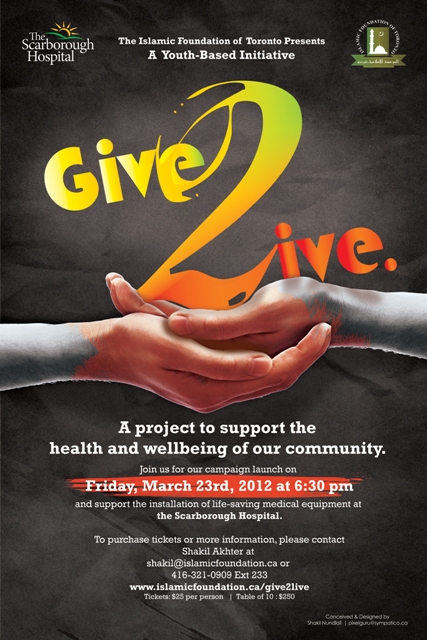 On January 18, 2012, the Scarborough Hospital Foundation launched its “Look Inside Yourself” campaign to raise funds for the new Magnetic Resonance Imaging (MRI) machine at the hospital’s Birchmount campus.

The Hospital Foundation has already raised $3.6 million through staff, physicians, volunteers and donors, and is now turning its sights on the Scarborough community to raise the remaining $1.4 million to reach its goal of $5 million.

“Every penny counts,” said Ms. Wong. “No amount is too small.”

Several local business owners and representatives from religious and cultural organizations, including the Islamic Foundation of Toronto and the Scarborough Chinese Outreach Committee, were on hand to present donations and join in the campaign.

The Scarborough Hospital’s commitment to cultural sensitivity and diversity has made them leaders among other health care teams.

Over the years, hospital staff has worked closely with the Islamic Foundation of Toronto to meet the needs of Muslim patients.

These include providing Halal meal options and modest hospital gowns for Muslim patients, as well as, the shrouding of deceased bodies according to Islamic guidelines.

“It is important that Muslims show this beautiful country that we are part of it and are positive contributors to its well-being,” said Humairah Saeed. “The campaign team requests your presence and the support of your family, friends, and colleagues as we work to make patient care better in Scarborough.”