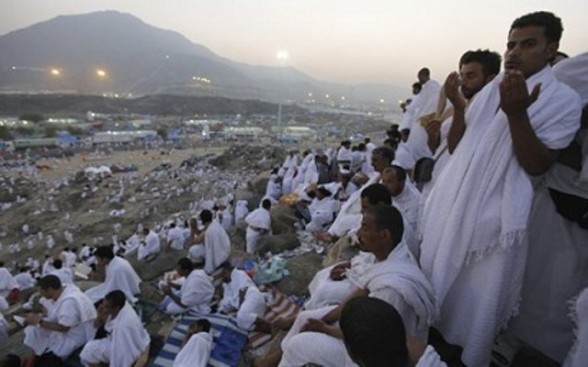 Seeking forgiveness from Allah, nearly three million Muslim pilgrims ascended Thursday, October 25, Mount `Arafat, east of the holy city of Makkah, in the climax of hajj after spending a night of meditation and introspection in the tent city of Mina.

“We came from Makkah. We walked from the Grand Mosque to Mina and then we took the buses to Arafat,” an Egyptian pilgrim sitting on a straw mat with his family members, told Agence France-Presse (AFP).

“All for the love of the Prophet,” he said.

“The more tired we get, the more God will reward us.”

Pilgrims flocked to `Arafat, also known as “Mount of Mercy”, from early morning, after spending a night of meditation and introspection in the tent city of Mina which marked the first leg of their five-day spiritual journey.

Chanting “Labbaik Allahumma Labbaik (Here I am answering Your call, O God),” the pilgrims made their way to `Arafat, where Prophet Muhammad (peace and blessings be upon him) delivered his last sermon 14 centuries ago.

Following the lead of the Prophet’s Sunnah, the pilgrims performed noon and afternoon prayer “Dhuhr and Asr” combined and shortened at the Namera Mosque.

A preacher urged pilgrims not to climb the slippery stone staircase leading up to the hill.

“Neither the Prophet, nor his followers have ever climbed the hill. Please do not climb it.”

Pilgrims spend the day on the plains of `Arafat in the most essential pillar of Hajj.

For the rest of the day, the pilgrims supplicate to God to forgive their sins and grant them mercy, and pray for fellow Muslims, and for unity and peace around the world.

Pilgrims then will descend by train back to Muzdalifah, halfway between Arafat and Mina, where they will take part in the symbolic stoning of the devil at Jamrat Al-Aqaba and spend the night.

On Friday, all pilgrims head back to Mina, where they sacrifice animals to mark the beginning of the four-day `Eid Al-Adha.

Muslims who perform hajj properly return to their homes having all their sins washed away as promised by Prophet Muhammad.

Every year, Makkah sees millions of Muslims from around the world pouring to perform hajj, one of the five pillars of Islam.

Hajj’s ceremonies are meant to symbolize the essential concepts of the Islamic faith, and to commemorate the trials of Prophet Abraham and his family.

Every able-bodied adult Muslim who can financially afford the trip must perform hajj at least once in a lifetime.

Many pilgrims prayed for peace and stability in the Muslim world.

“I wish all the Arab nations would unite,” Libyan Ali Ahmad Younis said, wiping a stream of tears from his face.

“I also wish my country Libya and all its cities – Bani Walid , Misrata, Tripoli – would be united. I wish we could all be united as one to bring an end to the bloodshed in Libya.

“I prayed to God that all Arabs and the Umma can unite,” he said, putting his face between his hands.

For Mai, a 34-year-old Egyptian, the Hajj is a “gift” from God that she will use to pray for “victory and peace in Egypt and all Muslim countries”.

Many pilgrims also prayed for the Palestinians and Al-Aqsa Mosque, Islam’s third holiest shrine in Al-Quds, which Israel occupied in 1967.

“My message for all Muslims is that we have to be united to liberate one of the greatest and holiest places in the world after Makkah, which is the holy mosque in Jerusalem,” Egyptian pilgrim Abdo Ibrahim Basha said.

“I am saying, ‘Just be united, and do not listen to the politicians and rulers because they just make it worse.’”

Pilgrims have also prayed for an end to the bloodshed in Syria, where more than 30,000 pilgrims have been killed in a 19-month uprising against President Bashar Al-Assad.

“All the Kurds are praying for the innocent Syrian people to pass through this crisis.”

“I am praying to God to support the Syrian people and make them victorious, to save their country from daily killing and help their children.”