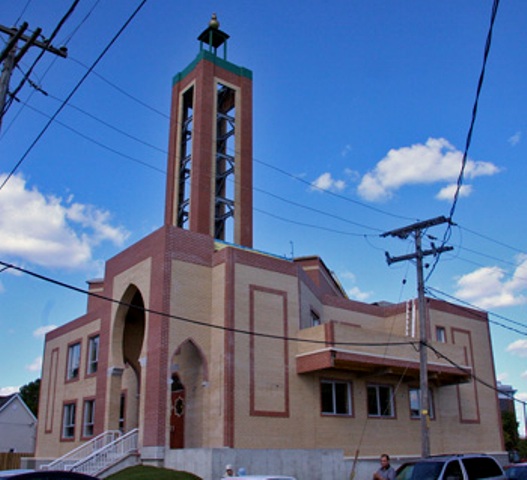 According to mosque officials the building was spray painted early this morning with hate messages following the earlier smashing of mosque and car windows and the attempted arson of  the cars parked in the mosque parking lot on Monday morning this week (see: below)

“The repeated vandalism, within days of the previous attack, of this specific mosque is deeply troubling.  Attacks on all our nation’s houses of worship must be condemned by all Canadians and should be investigated and prosecuted using all available law enforcement resources,” said Ihsaan Gardee, CAIR-CAN Executive Director.

CAIR-CAN is calling on the authorities to investigate this incident as a hate crime and is urging local police in Gatineau and nearby Ottawa to boost patrols near mosques.

Pictures of the graffiti can be viewed here:

Warning: Some of the language used is obscene

According to a CBC report vandals smashed the windows and tried to set two cars on fire and also smashed windows of the mosque.

The Canadian Council on American-Islamic Relations (CAIR-CAN) is calling on the Gatineau Police to investigate this incident as a potential hate crime and hopes that the perpetrators are swiftly brought to justice.

“While we are relieved that no one was injured in this instance, attacks on any place of worship are deeply offensive and hurtful,” said Ihsaan Gardee, CAIR-CAN Executive Director.

“While very troubling, CAIR-CAN does not believe such incidents represent the sentiments of the vast majority of Canadians and we ask our fellow citizens of conscience to join us in condemning this act,” added Gardee.

Members of the mosque are expressing concern over the attack.

“Since this is the third time in 5 months and the first time that a person tried to set a fire, the community is very concerned and scared,” a member of the mosque told IQRA.ca.

Meanwhile in New York, police are investigating a series of arson attacks in the  borough of Queens on Sunday in which one of the targets was an Islamic centre.