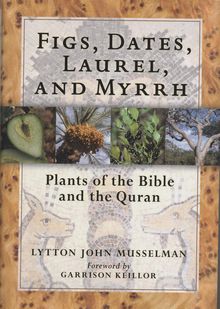 Within the holy scriptures of the Abrahamic faiths, there are numerous references made in passing to elements of nature. Some are made in a descriptive form to allude to traits or behaviors, while others describe the beneficial or medicinal uses of specific plants.

Recently, there has been a renewed interest in these plants and what we can learn about them from a historical and religious perspective.

Figs, Dates, Laurel and Myrrh – Plants of the Bible and the Quran, by Lytton Musselman, examines the history and culture of these plants and how the society of the time was influenced by the ecology of their surroundings. This comparative analysis also reviews the ethnobotanical relationship of the traditional plants and explores the differences observed within Christianity and Islam.

The goal of the book is two-fold. The first is to help readers of the scriptures better understand the ecological and cultural factors that led to the inclusion of various plants within the teachings. The second is to provide insight into the plants themselves and reflect upon the diversity of form, colour, smell and use.

Musselman notes upfront the limitations of writing a book on such a topic which requires both a familiarity of the botanical history of the region and a strong background of the theology of the religious texts. There is also a literary style that is often lost in translation such as inadvertent descriptions or the identification of plants that are not native to the region.

The book itself lists over 100 plants documented within the Bible and Quran with one chapter devoted to each plant. This includes a short botanical description of its morphology, characteristics of its growing and harvesting cycle, its habitat range, the scriptural context in which it was described and its current uses today.

The number of well-defined plants within the Quran is about a quarter of those described within the Bible, with many of them overlapping both books. The observed difference is due to the Quran being shorter than the Bible and the semi-arid climate in which it was revealed.

Many of the plants have symbolic meanings that are linked to the scriptural imagery that is often expanded in practice. Examples of plants and their products described in the book are embedded in Middle-East culture.

Overall the book is a good resource for those interested in exploring the background of the plants within the Bible and Quran. The historical context and evolution of their use provides an interesting framework to structure the book and cohesively ties in with the botanical descriptions of each plant.

Where the plant is described in both scriptures, a comparison between contexts is made to demonstrate their respective importance within each faith. Musselman strives to maintain scientific rigor when identifying and describing each species, which provides a comprehensive picture of the ecology of the region and evolution of their use.

This enables the reader to pair their understanding of the religious history to form a complete picture of how the interaction of the environment shaped the culture and development of each religion. I would highly recommend this book to those interested in the ecological aspects of religion or those curious about the use of plants in the holy scriptures.