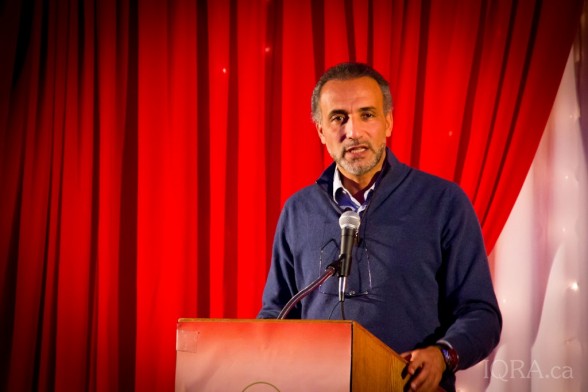 Highlighting the Islamic teachings of giving and contribution, a leading Muslim intellectual has called on the Muslim community in Canada to play a positive role in promoting the welfare of their society.

“The power of this faith is to have a positive perception of yourself.”

In a speech themed “Reflections from the Heart” last week, Ramadan spoke of the moment when Prophet Muhammad (peace be on him) received the first revelation from Allah, through the Angel Jibreel.

“You come to the experience of the Prophet, peace be on him, and you get the sense of this journey,” he said.

“Allah took him from a very specific situation and, step by step, helped him to understand, through the revelation, the very essence of our religion.

“The first thing that was converted with Jibreel coming to the Prophet was the self-perception – what you think you can’t do alone, with Him you can,” he added.

“This is the power of faith – you can do it, bismi rabik.

“You end up responding to questions coming from outside and not at the heart of your tradition.

“It is important not to be focused and obsessed with ‘what shall I say if I am asked’ but what should I understand when I am alone with Allah.” 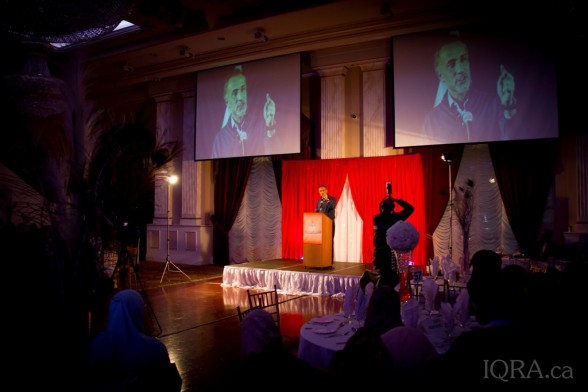 Ramadan spoke of the ‘conversions’ that Muslims should go through to experience the essence of their religion.

“The power and the strength that came to the Prophet, peace be on him, as the chosen, the purified, as the beloved is in fact the understanding that Allah took him step by step and made him understand the essence of Islam,” Ramadan said.

“The very essence of this religion is liberation.

The second conversion Ramadan mentioned in his speech was how Muslims relate to the natural world.

“Second, look at the world around you. You have in this country, nature and this environment – celebrate this,” he said.

“But to celebrate the environment, it means you have to study.

Ramadan is one of Europe’s leading Muslim thinkers and has often condemned terrorism and extremism.

An author of 20 books and 700 articles on Islam, he was named by Time magazine as one of 100 innovators of the 21st century for his work on creating an independent European Islam.

Professor Ramadan passionately spoke of how Canadian Muslims should relate to the society.

“Change the way you look at the society – don’t try to talk to the rich and powerful to change, be close to the poor – these are your people,” he said.

“When you serve the poor you educate the heart,” Ramadan said.

“If you serve somebody who has nothing, it means that you might be close to Allah.”

Professor Ramadan then asked the audience to reflect on their presence in Canada.

“You should know why you have to thank Allah for being in this country,” he said.

“You can keep on thinking about the countries of origin that you left but you have to convert this into something – thank Allah for being in Canada.

“And if you don’t know why you have to thank him, you must start checking and looking for an answer.”

The prominent intellectual also spoke of the role of Canadian Muslims in their society.

“You are not in Canada by accident; there are many things in this society that are better than in Muslim majority societies – say thank you and start working,” he said.

“The best way to thank Allah is to serve the people in all the fields and it has to come with generosity,” he urged.

“To believe is to give – to give to anyone who is in need; to give to women who are facing discrimination or violence – we give and we support and we protect.”

Prof. Ramadan concluded his presentation by asking the crowd to carefully consider their relationship to their fellow citizens.

“You are not going to reform any society if you don’t love the people with whom you live,” he said.

“Some of us Muslims are in this binary vision; we are Muslims – we are good and them – they are not.

“You should be a mercy to the worlds,” Ramadan said. “How can you be if you come with minds that judge and not with hearts that love.

“You will not complete your faith if you don’t love for your fellow human beings what you love for yourself – so in the name of God, serve Him, love and give.”