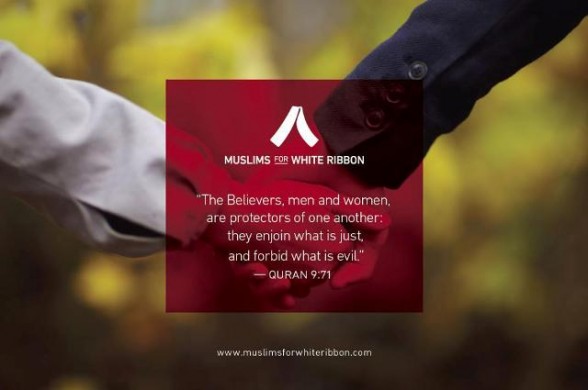 Canadian Muslims have announced the launch of the Muslims for White Ribbon Campaign to work towards ending violence against women.

“This national campaign will allow Muslim Canadians to reflect on the reality of violence against women,” said Imam Michael AbdurRashid Taylor, Co-Chair of the Muslims for White Ribbon Campaign. “We hope to challenge everyone, especially men and boys, to speak out and think about their own beliefs, language and actions.

The White Ribbon Campaign (WRC) is the largest grassroots effort in the world of men working to end violence against women.

Muslims for White Ribbon Campaign is being launched with the unveiling of the campaign website (www.MuslimsforWhiteRibbon.com) and with Imams and Muslim leaders committing to join with others to work to end violence against women.

“By wearing a white ribbon and making a personal pledge to ‘never commit, condone or remain silent about violence against women and girls’ men can act as positive role models and advocates for change,” said Imam Michael AbdurRashid Taylor.

The Campaign will be run from November 25, 2012 [International Day for the Elimination of Violence Against Women] and culminate in White Ribbon Days at the Reviving the Islamic Spirit Conference at the Metro Toronto Convention Centre (Dec 21 – Dec 23).

A National Khutba Campaign in which Imams across the country will deliver a sermon on Violence Against Women is scheduled for Friday, December 14, 2012.

The main goals of Muslims for White Ribbon Campaign are to:

●       Break the silence on violence against women in the Muslim community by encouraging Mosques and organizations to sponsor awareness events and deliver a Friday Khutba (on December 14) on this issue.

●       Create partnerships among Mosques, women’s organizations, and social agencies to create a future without violence against women.

“The campaign is organized by a committee of volunteers – fathers, sons, grandfathers, brothers, uncles, and friends,” said Imam Michael AbdurRashid Taylor. “Violence against women and girls is unacceptable and we are committed to working with our fellow citizens to eliminate it.”

Further information about the Muslims for White Ribbon Campaign can be found at www.MuslimsforWhiteRibbon.com