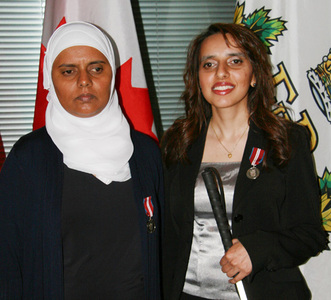 “It was indeed an honor to be in the company of renowned media personalities, armed forces personnel, artists and others working to make Canada and the world a healthier and safer place,” Rabia Khedr told IQRA.ca after receiving the medal. “I certainly felt proud to be Canadian.”

David C. Onley, Lieutenant Governor of Ontario, hosted the Diamond Jubilee Gala in which medals were presented to more than 600 Canadians at Toronto’s Roy Thomson Hall on Monday June 18, 2012.

This year marks the 60th anniversary of Queen Elizabeth II as Queen of Canada.

The sisters lost their sight to retinitis pigmentosa, a genetic disorder.

Rabia Khedr is a well-known Canadian Muslim who has worked tirelessly to raise awareness around disability issues.

As the eldest of four siblings, she quickly learnt to lead.

“I have two brothers, both of whom have intellectual disabilities and a baby sister with the same eye condition. I had to take on a leadership role in the house out of necessity,” she said.

Before university, she had not given diversity or religious identity much thought.

At university, she became actively involved with the Muslim Students Association (MSA) where she played a leadership role within the association but never stepped into the limelight. Her activism increased after university.

Within days of graduation, she started wearing a hijab which she still wears.

Rabia Khedr went on to found the NGO, the Canadian Association of Muslim with Disabilities (CAM-D), whose mission is to work toward an inclusive society by promoting principles of accessibility.

Khedr, who is married and has four children, runs her own consultancy company and she has consulted for the Canadian Association for Community Living and Providence Health Care. She sits on the board of the Ontario Women’s Health Network and is a member of the City of Mississauga Accessibility Advisory Committee.

Rabia Khedr’s younger sister, Uzma Khan, has also been active in disability issues. Khan works in information technology with a Canadian bank and was vice-chair of the former Accessibility Advisory Council of Ontario.

In keeping with the tradition of honoring Queen Elizabeth II milestone years of service, the commemorative medal has been created to mark the 60th anniversary of Queen’s accession to the Throne. The medal also serves to honor the contributions and achievements made by Canadians from all sectors of society.

“I am glad that the Lieutenant Governor recognized my work as an activist and particularly the work around accessibility for Muslims with Disabilities through CAM-D to nominate me for this recognition,” Rabia Khedr said. “There is no other place that I would be proud to call home than Canada and to be recognized as 1 in the 60,000 Canadians receiving the medal is indeed an honor.”