(February 6, 2012) – In her native Guyana, 16-year-old Atiyya Bacchus grew up reading the great classics of literature — Dickens, Twain, Brontë — unaware that her life was about to take a turn worthy of the great dramas she immersed herself in.

Five years ago, her family’s home was destroyed in a fire. Soon after, they set off to start a new life in Canada. After rebuilding their lives in Pickering, Atiyya often felt isolated in her unfamiliar surroundings, and began losing herself in books once again. She checked out 48 books at the Pickering Public Library, and breezed through them in two weeks. “I have an affinity for libraries,” she admits.

Her passion led her to become involved in a reading circle, and the development of a special friendship with a six-year-old girl with whom she works on a continual basis. Thus began a crusade to empower as many girls and women as should could, in her community and beyond, making many new friends along the way. 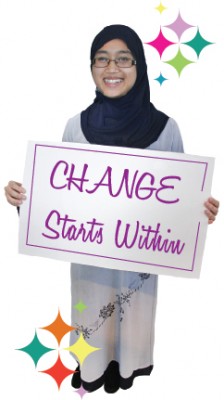 No event is too small or big for Atiyya to tackle. Locally, she has organized a car wash to raise funds for the Canadian Heart & Stroke Foundation, and she started a crocheting circle for young mothers. Through the Women’s Multicultural Resource and Counselling Centre of Durham, she has provided support and advice to other teenage girls who have recently immigrated to Canada, and she volunteered at an event bringing awareness to the issue of violence against women.

On the international front, Atiyya has volunteered in an AIDS clinic in Guyana, a nation with the second highest rate of HIV/AIDS prevalence in Latin America and the Caribbean. She has also raised funds for community development projects in Sierra Leone, after reading about the plight of its people.

Through the YMCA of Greater Toronto’s Youth Leader Corps (YLC) group in Pickering, she led a group in making paper lanterns containing peace messages, which were sent to Hiroshima, Japan, as part of a Global Peace Lantern project. Her efforts earned her the YMCA Peace Medallion for all of the Durham Region.
Atiyya says, “Empowering women and girls means providing them with the opportunity to find acceptance and peace within. We each have the potential to achieve something great. There is nothing to hold you back and to stop you from pursuing what you believe in.”

As part of International Development Week, the Ontario Council for International Cooperation (OCIC) is honouring five young women from across the province — including Atiyya Bacchus — for empowering and making a difference in the lives of women and girls in their communities and around the globe.

International Development Week 2012 is February 5-11, 2012. During that time, OCIC, an expanding community of Ontario-based international development and global education organizations and individual associate members working globally for social justice, will honour five young “Global Changemakers” for their work to promote gender equality in their communities and around the world.