The largest annual Muslim convention in North America is set to open in the US capital, Washington DC, on Friday, August 31.

“America was founded as a pluralistic nation with a basis in faith, standing for principles that we also share as Muslims,” organizers said.

“Not only did our shared Abrahamic faith affect the founding fathers, but also many of them had actually studied and demonstrated great respect for Islam and recognized our shared morals.”

Themed “One Nation Under God: Striving for the Common Good”, the 49th Annual Convention of the Islamic Society of North America (ISNA) will open on Friday.

It brings together thousands of attendees from across the United States and Canada to listen to a galaxy of scholars, eminent speakers from across the world, government officials and interfaith leaders.

Over 200 speakers are scheduled to address the weekend convention, including Tunisian leader Rachid Ghannouch.

In addition, there will be a grand bazaar in the convention that will showcase more than 600 vendor booths selling merchandise that includes books, audio-video products, clothing, gift items and services for Muslims. 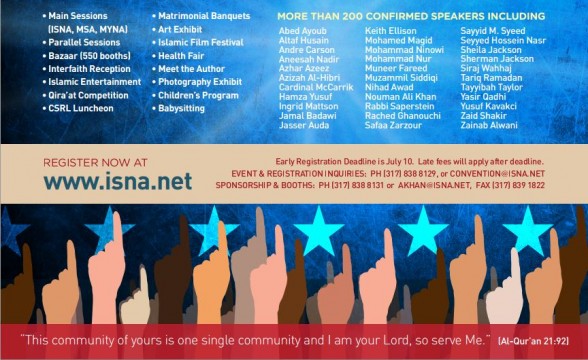 Speakers will address attendees about different issues ranging from religions to youth.

An advocate of religious tolerance and freedom, Ghannouchi will address the convention on the topic, “The Arab Spring: Interreligious Cooperation Leading the Change for the Common Good.”

Armstrong will be the keynote speaker at the Annual Community Service Recognition Luncheon which is held during the convention to recognize a community leader who has made an outstanding contribution to the Muslim community in North America.

Armstrong, who is best known for her book, “A History of God,” is a scholar and a former nun who has written more than 20 books on faith and the major religions.

The Muslim Students Association (MSA) and the Muslim Youth of North America (MYNA) will be holding parallel sessions over the weekend with topics geared towards university students and youth.

There are other concurrent sessions planned, such as a film festival, art exhibition, professional networking sessions, book launches, a Qur’anic competition, and matrimonial sessions.

Salman Ahmad of the Junoon band, and one of South Asia’s most influential cultural figures, will headline the Sunday night entertainment program.

Ahmad led Junoon in a 2001 performance at the UN General Assembly Hall—the first such rock performance in that hall. In 2007 Junoon performed at the Nobel Peace Prize ceremony in Oslo.

The popular Saturday evening plenary session, and traditionally a highlight of the convention, will deal with the theme, “One Nation Under God: Striving for the Common Good”, and will be addressed by well-known American Muslim leaders Imam Mohamed Magid, Dr. Sherman Jackson and Shaikh Hamza Yusuf.

“The speakers will use examples from the Qur’an, Hadith, Sunnah and American history to discuss the role principles of Shari`ah, such as dignity, protection of religion, and the betterment of society played in the founding of this nation,” according to the session abstract.