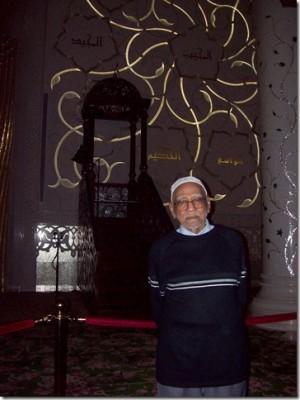 Ustadh Haniff Bagh Khan was among the city’s most respected, loved, and widely acclaimed teachers.

He was a teacher of teachers and a celebrated hero in the Muslim community.

He promoted the learning of the Arabic language, the recitation of the Qur’an and most importantly that loving the holy Prophet Muhammad (upon whom be peace) was the bedrock of one’s faith.

He always stood his ground even when his views and teachings weren’t popular.

He was the most energetic elder I ever knew whose heart was attached to the masjid.

Everyone knew that when you came into the Imdadul Islamic Centre in Toronto and looked to your right, Ustadh would be sitting in the corner imparting wisdom and good company to others.

He was always in a state of remembrance of God.

His advice to me when I brought both of my kids to him as newborns was to teach them “la” as the first thing to say. He was telling me to teach them the key to everlasting joy and happiness beyond this temporal world: “la ilaha illa Allah” (there is no God but Allah).

In September 2011, when news of his passing had spread, the Imdadul Islamic Centre along with the home of his daughter was packed with people for weeks to come – each coming to pay their respects, offer prayers, and console the family that lost not only a father or grandfather, but an icon of the Muslim community.

This was in addition to the outpouring of condolences and sadness from communities throughout Guyana, Trinidad, the United States, and other parts of Canada.

In fact, when Ustadh passed on a Wednesday afternoon, a gathering (largely comprised of people from Leguan, Guyana – his hometown) undertook a complete reading of the Qur’an (khatm) on Ustadh’s behalf that same evening!

Why, you might ask, is it that we are remembering Ustadh now?

Well, the truth is there are two reasons. First, we never stopped remembering him and miss him dearly.

My father would always tell my brother, sister, and I stories of the great men of Guyana who worked tirelessly for Muslims both back home and here in Canada.

The late Mohamed Nasir (who he endearingly referred to as “Twins”), Imam Naseer Khan (Islamic Missionary Guild) and Ustadh would always be mentioned – may God have mercy upon them all.

He would tell us about how Ustadh studied and became a pharmacist but gave it all up to teach Qur’an, where he would be spotted on his famous big blue bicycle riding from home to home of his students.

As Guyanese Muslims embrace the cherished tradition of Milad-un-Nabi this season, it is essential to remember and pay homage to the very people who kept Qur’anic learning and the Prophetic traditions alive in order to pass them down.

He stood in your honour and veneration

Seeking your intercession through your most perfect station.

Let him drink from your blessed hands that Day,

And accompany him in the highest of gardens

Where only the most elite shall stay.

[Ustadh Bagh Khan’s Simplified System of Learning to Read Arabic in 21 Days continue to be held privately at Imdadul Islamic Centre every Sunday by his daughter and son-in-law.  Also a special Salaat and Salaam booklet along with CD is being distributed in memory of Ustadh for this during this Mawlid period. Please contact 416-638-7021 for further information.]