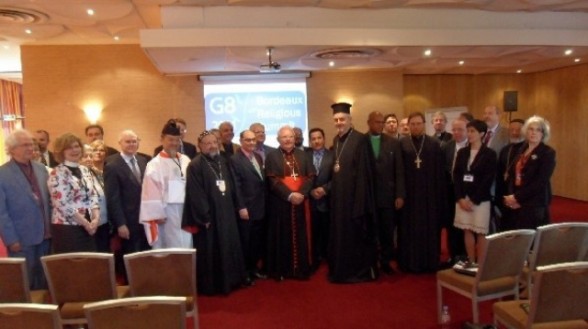 (26 May 2011) – Senior religious leaders of different faiths called on the group of G8 and G20 countries to take bold action to address global challenges such as climate change, the economic crisis, and extreme poverty.

These problems are global in nature and require a global response.

The senior religious leaders gathered in Bordeaux, France, on 23-24 May 2011 to discern areas of profound moral consensus among religious traditions.

They communicated their concerns to the governments participating in the upcoming G8 Deauville Summit (France, 26 – 27 May) and the G20 Cannes Summit (France, 3 – 4 November) through the French Foreign Ministry.

Dr. Karen Hamilton, the Secretary General of the Canadian Council of Churches and an International Co-President of Religions for Peace, stated:  “Collaboration among stakeholders is growing, but more is needed. Religious leaders are urging the G8 and G20 countries to strengthen and expand partnerships to include other countries and groups, including religious communities. This expanded cooperation should supplement rather than undermine UN processes.”

H.E. Cardinal Jean-Pierre Ricard, the Archbishop of Bordeaux et Bazes, noted that “religion provides a perspective beyond the mere social, political or economic need to reduce poverty.”  At the same time, he noted that “it is imperative that governments and religious communities, despite their different identities, mandates and capacities, work together on common problems.”

The Moderator of the Religious Summit, H.E. Metropolitan Emmanuel, the Co-President of the Council of Churches of France and a Religions for Peace International Co-President, stated that “current events around the world, notably in the Middle East and North Africa, make clear that people everywhere are demanding that their fundamental dignity be honored.”  He further noted that “honoring human dignity must include the protection of the rights to freedom of religion as well as political self-determination.”

Rabbi Richard Marker noted that “the economic crisis made it clear that unfettered markets are not necessarily efficient, stable or self-correcting.”  He further noted that “a robust regulatory framework is urgently needed to prevent future financial crises and to protect the most vulnerable people.”

Canon Guy Wilkinson, representing the Rt. Rev. Rowan Williams, the Archbishop of Canterbury and a Religions for Peace Co-President, noted that “climate change is already making it difficult for people around the world.”  He urged that religious communities and governments “find ways to collaborate to build an effective global consensus on how to transition to a low carbon economy that can provide possibilities for economic flourishing.”

The Rev. Nichiko Niwano, the President of Rissho Kosei-kai, an International Co-President of Religions for Peace, and the Moderator of a religious leaders summit in Japan in 2008, noted the importance of the concern for poverty that has run like a thread through all of the religious leaders summits.  “Too many of the world’s poor remain locked in a poverty trap, with no escape hatch.”  He urged “G8 and G20 countries to renew their commitments to fulfill the UN Millennium Development goals,” stating “it was both a moral and religious imperative to live in solidarity with the world’s poorest.”

Dr. William F. Vendley, Secretary General, Religions for Peace International, noted that “there is a consensus among religious leaders that G8 and G20 governments need to invest more in peace. Global investments in peacemaking, which are miniscule compared to military budgets, should be increased and the non-military instruments of peacemaking strengthened and expanded.” He noted “Stronger global leadership is needed to protect those denied basic human rights, including religious freedom and self-determination.”