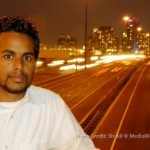 (February 3, 2011) –  Lately many of you have been seeing my many posts on social media about what has been happening in Egypt.

I am not Egyptian nor am I Arab.

However, I lived there in Cairo for almost a year while I was in university.

I have been through Tahrir (Liberation Square) so many times, I can’t even remember.

While living there, I witnessed the generosity of the Egyptian people and their love, great sense of pride and patriotism for their homeland.

I also witnessed the reality of daily life for Egyptians.

I shaved my beard while I was there because the Secret Police would notice you much more readily if you had a beard, especially if you went to the mosque for the early morning prayers.

As a Canadian, I could simply be deported but for my Egyptian friends they could end up being arrested, jailed, tortured or beaten, if they were suspected of any talk about the government or even Islam, in some cases.

I witnessed this first hand.

I got to know many of my neighbors while I was there.

One night, there was some noise in the middle of the night.

The next morning, I found out that the secret police came in the night and took one of our neighbors away.

His wife was several months pregnant.

He was jailed for several months, beaten up and then eventually released – hopefully, not only had he learnt his lesson, he would spread the word.

Whenever my friends and I would go to visit Egyptian friends, we would not go all together.

Instead, we would go at different times and enter and leave the building using different entrances.

Egypt has been under martial law for years and a gathering of more than 3 persons could be arrested.

The poverty was great and groups like the Muslim Brotherhood (the “bogeyman” in Western media) were the ones doing much social work, helping the poor and needy.

Even more recently during the protests, when there was danger that the Secret Police would be damaging property and attacking people, the Muslim Brotherhood sent all their members out to direct traffic and protect public property.

Hosni Mubarak has been receiving billions of dollars in U.S. aid.

He did this routinely but America and other Western countries didn’t say anything about DEMOCRACY then, because Mubarak was a good stooge.

He did what the West wanted.

Today, thanks to social media, the world is starting to get a glimpse into the reality of what has been happening in Egypt for decades.

Tonight, when the protesters were peacefully protesting, the government sent their thugs in to shoot at them.

One of my friends was shot, another was beaten, as well as many others, young men and women, I don’t know about.

I write this note because I want people to know why I care so much.

Still, there is another reason.

If the People’s Revolution works in Egypt, others will follow in the Middle East because Egypt has historically been the leader of the region.

For too long, the people of the Middle East have suffered tragedy after tragedy under dictators, funded and supported by Western governments.

The protestors are not going anywhere.

They are there for a reason and they will not give up.

I have the greatest sense of respect, love and admiration for them.

They – Muslims, Christians and quite frankly ALL others – have suffered for so long and we have been silent, complicit.

The decision with which they are faced is whether they “live freely or die with dignity.”

Today, we must speak up.

If we don’t, in several hours, Liberation Square may be awash in a sea of red- the blood of true heroes of Egypt.