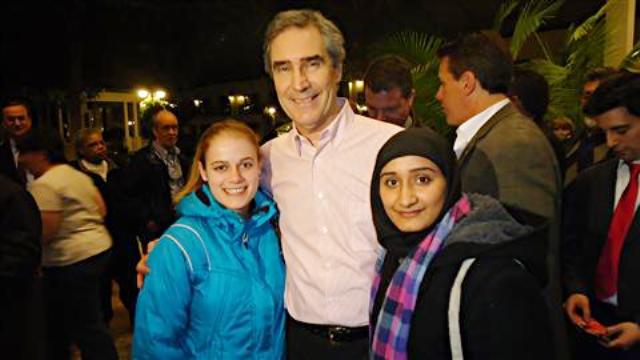 (April 5, 2011) – Awish Aslam, a second-year political science student at the University of Western Ontario, told reporters she and a friend were trying to attend a Sunday rally with Stephen Harper when they were asked to leave by an RCMP officer.

The incident has caused the Conservative leader to defend the party’s practice of tightly controlling access to political rallies but he refused to apologize.

“The staff runs our campaigns and I can’t comment on individual matters like that,” Harper said of the incident.

Aslam told media outlets that she and a friend signed up for the rally in London Sunday with the help of her friend’s father, who is a Conservative.

On arrival, she and her friend were approached by two officials and were asked to go outside the door, she told Postmedia News on Tuesday.

Once there, she said one of the officials ripped the Conservative stickers that had been previously given to them off their clothing “and ripped them into pieces.”

“He said, ‘You are no longer welcome here,'” she said.

“He said ‘We know you have ties to the Liberal party through Facebook.”

The Facebook photo of her standing next to Liberal leader Michael Ignatieff had been taken the previous week when she attended a Liberal rally in London.

Liberal leader, Michael Ignatieff, told reporters during a campaign stop in Newfoundland and Labrador that “you are in a very un-Canadian place” when citizens get tossed from public meetings for having “a certain Facebook friend: me.”