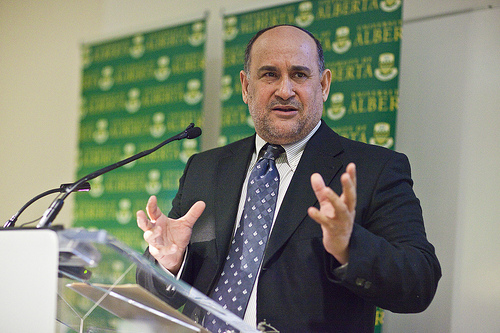 (July 11, 2011) –  Ibrahim Abu-Rabi, a world-renowned expert on contemporary Muslim thought, a voice of moderation and great University of Alberta ambassador, died suddenly and unexpectedly during a visit to Jordan July 2. He was 55.

Since 2008, Dr. Abu-Rabi has taught at the University of Alberta in Edmonton, Alberta.

He was the first holder of the Edmonton Council of Muslim Communities Chair in Islamic Studies, the first teaching and research chair of its kind in Canada.

“I am greatly saddened to learn of the sudden loss of one of our own, professor Ibrahim Abu-Rabi, chair of Islamic studies,” said University of Alberta’s President, Indira Samarasekera. “As a mentor and a teacher, he was well known for his passion for teaching and his dedication to building understanding between people of various faiths.

“He will be remembered for his enthusiasm for his work, his unwavering support of his colleagues and students, and his care and compassion for all.”

He had been an esteemed Professor of Islamic Studies and Christian-Muslim Relations at Hartford Seminary from 1991 to 2008.

When Dr. Abu-Rabi came to Hartford Seminary in 1991, he was the first full-time Muslim faculty at an accredited Christian seminary.

He also served as Co-Director of the Duncan Black Macdonald Center for the Study of Islam and Christian-Muslim Relations and Senior Editor of The Muslim World journal.

“Ibrahim’s contribution to the study of Islam and Christian-Muslim relations at Hartford Seminary was immense and reached all over the world. We will never forget him,” Hartford Seminary’s President Heidi Hadsell said.

“We will honor and remember him in a memorial service at the beginning of Ramadan in early August,” she said.

He went on to get a master of arts in political science degree from the University of Cincinnati in 1982 before attending Temple University in Pennsylvania, where he completed a second master’s degree, this time in religious studies, and a PhD in Islamic studies in 1987. His dissertation topic was “Islam and the Search for Social Order in Modern Egypt: An Intellectual Biography of Shaykh ‘Abd al-Halim Mahmud.”

Abu-Rabi left from Temple University for stops at Virginia Commonwealth University and the University of Texas at Austin, before taking a post at the Hartford Seminary in Connecticut, where he was professor at the Macdonald Center for the Study of Islam and Christian-Muslim Relations, beginning in 1991.

He had a special interest in the study and practice of interfaith dialogue between the Islamic and Christian religious traditions, and specialized in issues of contemporary Islamic thought, particularly on religion and society, and mysticism.

He traveled widely in the Muslim world and believed that building bridges among faith communities is necessary in a highly globalized world. While at Hartford Seminary, he helped place the Seminary in a leading position in Muslim-Christian relations around the world. Students came from many countries – among them Turkey, Syria, Egypt, Indonesia, Singapore, and Pakistan– to study with Dr. Abu-Rabi.

At the Hartford Seminary, Abu-Rabi was extremely popular with students.

His hospitality at his home was outstanding, and he made sure students received both an excellent academic experience and a comfortable living experience.

In 2006 he was the Senior Fulbright Scholar in Singapore and Indonesia at the Institute of Defense and Strategic Studies at Nanyang Technological University in Singapore.

He leaves his wife Fatima and two children, Yasmin and Yusuf.

U of A undergraduate student Mustafa Farooq wrote in a letter how he was struck by Abu-Rabi’s “genial nature, his bearing, and his wisdom.”

“He could meet anyone and instantaneously connect with them, and make them feel at ease.”

In addition, Farooq’s letter talked about his mentor’s devotion to both his research and his teaching.

“[Dr. Abu-Rabi] taught me that university research and involvement was about a struggle to make the world a better place, and that the struggle had to permeate every pore of your existence; and that included bringing the struggle to home.”