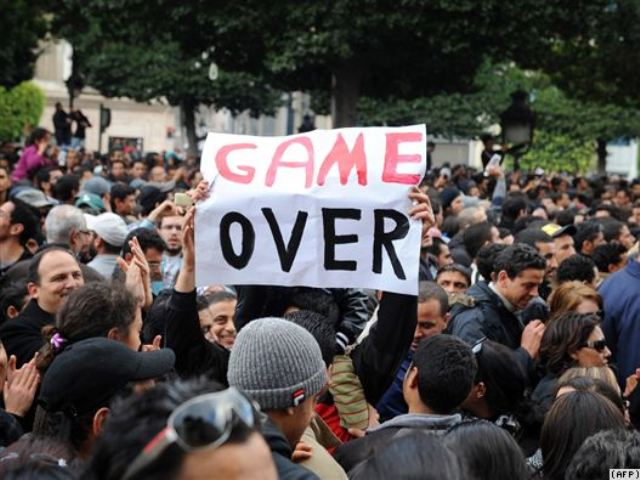 There has been a democratic revolution in Tunisia over the past four weeks. This is a new and exciting era in Tunisian history, and an example for other countries of the Arab world.

Unfortunately, however, it all started when a 26-year-old university graduate set himself on fire on 17 December in a public town square in Sidi-Bouzid, in the south of Tunisia. He died a few days later.

Daily demonstrations and clashes with the police ensued and quickly spread to other cities. The demands initially focused on economic issues, such as employment and poverty alleviations, but quickly became political: denouncing corruption and demanding accountability, freedom of expression and a representative government.

The overwhelming majority of the demonstrations have been peaceful, ranging in size from a few hundred to over 40,000 people. The government, the opposition and experts on Tunisia were caught off-guard by the magnitude and the strength of these spontaneous demonstrations, and by the veracity of their political demands.

Tunisia has often been cited as a “good student” of the World Bank and the International Monetary Fund. It has enjoyed sustained economic growth in the past 20 years – extraordinary by Arab standards – posting an average of five per cent annual growth. However, the “spoils” of development have not been shared equally between all sectors or regions of the country.

Corruption is rampant, with a few families and individuals controlling an increasing proportion of the economy. Tunisians speak daily about how the “Trabelsi clan” – the family of the president’s wife – is above the law and forcibly stealing private and public lands and properties.

Officially, unemployment is at 14 per cent, however, among recent university graduates (85,000 students graduate every year), it is estimated to be between 34 per cent and 36 per cent.

A restive youth decided to take matters into its own hand. The half of the Tunisian population under 25 years of age declared “enough is enough” and took to the streets to demand immediate changes.

Promises by Tunisian President Zine El Abidine Ben Ali of creating 300,000 jobs over the next two years and guaranteeing a job for every graduate within two years of entering the job market did not appear to satisfy popular thirst for major reforms, especially at the political level. On 12 January, Ben Ali indefinitely closed all schools and universities, called in the army, announced the release of all prisoners and an investigation looking into charges of corruption. But it was too little too late. On 14 January Ben Ali stepped down.

The opposition has now been galvanised and united like never before. In the past, the government played on the divisions between Islamic and secular forces to keep the opposition weak and divided, but Tunisians abhor violence and extremism, and do not want a theocratic government. What they do want and deserve is a democratic system of government that is based on their Islamic values and identity.

It appears that opposition leaders have finally overcome their fears of the regime, and mistrust of each other, and are willing to work together for political and economic reforms. Tunisians, across the board, realise that prosperity for the majority of people or economic development that benefits everyone will not be possible without political reforms, a major clampdown on corruption, and a representative and accountable government that listens to the people, and protects their rights and interests.

The rules of the game are changing. The interim government, or any future government, must pay close attention to public opinion and sentiments. They promise to legalise all political parties, and organise free and fair elections with international observers within six months. They also promise to reform the political system to allow greater transparency and accountability. Government officials have been reminded that they are public servants. Let’s see if they can act the part.

Having seen the success of people’s power in Tunisia, it is probable that other Arab populations will demand similar rights and reforms in the coming months and years. Already there are reports of self-immolation by people in Algeria, Egypt and Mauritania, hoping to be heard and to set their countries upon the same path as Tunisia. Arab leaders must reform or face their people.

The genie of democratic change is out of the bottle.

* Radwan A. Masmoudi is President of the Washington, DC-based Center for the Study of Islam and Democracy. This article was written for the Common Ground News Service (CGNews).