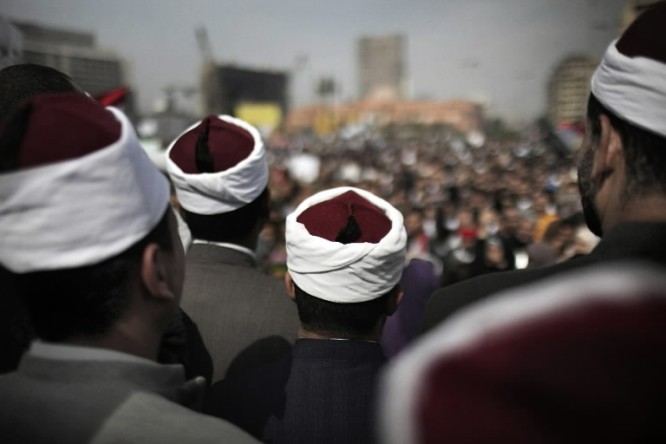 (February 25, 2011) – Recent earthshaking events in much of the Arab and Muslim world have shone merciless light not only on the actions of tyrants and dictators and their Western enablers, but on their officially religious Muslim partners in crime as well.

When angry, determined but peaceful masses of citizens took to the streets in Tunisia and Egypt, first in their tens of thousands, then in their hundreds of thousands, then in their millions, a common response among state and semi-official ulema was to condemn the protestors. They were causing fitna, opined men of religion in Cairo and, not surprisingly, in Mecca. Muslims should oppose attempts to topple their “legitimate” rulers.

The same abject message was relayed by their international network of yes-men at the local mosque level, causing anger and revulsion among rank-and-file Muslims anxious to rally to the side of their Tunisian and Egyptian sisters and brothers.

It continued even as deposed despot Ben Ali was welcomed by the “Saudi” regime. This was the very regime that bankrolls and promotes the international terrorist organizations Ben Ali claimed to be fighting against on behalf of the West.

It went on even as Riyadh and Tel Aviv jointly called upon their Western backers to protect the collapsing Raïs.

In Egypt, as the Mubarak dictatorship began to waver, and as immense crowds of men and women thronged public squares throughout country, scholars from al-Azhar who for years had bent over backwards to please the regime, finally found faint words of support for the democracy movement.

Where had they been for those thirty long years?

Here’s where: praising the dictator and anointing his son as successor; blessing the natural gas deal that gave away the country’s vital energy resources to Israel at a fraction of the price paid by Egyptian citizens; giving their benediction to the slow starvation of Gaza…

And as the regime breathed its last, still other pusillanimous scholars issued fatwas on prestigious websites such as OnIslam.net detailing licit means of demonstrating in public. Such demonstrations are permissible, they ventured, as long as life and property are respected—and as long as women are separated from men and relegated to the back.

One searches in vain for such closely reasoned objections to the use of automobiles to crush demonstrators, or to the regime’s practice of sending thugs to beat and shoot unarmed protestors of both sexes.

Too late, learned scholars. Back to your books.

All can now view images of Egypt’s predominantly Muslim citizens in public squares throughout the country, where men and women, side by side, were calling for the fall of the tyrant, resisting the police, organizing clinics and canteens, caring for the wounded, and praying.

All can see similar images from Tunisia, from Bahrain, and today, from Libya.

In these cases, the exemplary, self-sacrificing moral standards of the people showed the authors of these fatwas to be little better than the religious equivalent of Mubarak, Ben Ali and Qaddafi and their security forces. Cruel, disdainful, haughty, and then, when events have passed them by and proved them wrong, still attempting to tell people how to behave when they have no lesson in morality to give.

To all of them, and particularly to the Chief Mufti of “Saudi” Arabia, which its citizens now describe as a “garbage can for dictators”, one can only say: “go now!”

Your erudition is an insult; your jurisprudence a hollow shell.

In the light of recent events, Islam itself, as currently represented by the venal parasites that masquerade as ulema, stands in sore need of the kind of cleansing process administered by the people of Egypt to the despot Mubarak, and by the Tunisians to Ben Ali and his gang of thieves. As they fell, and as their regimes will soon follow, these dealers in religion and their royal paymasters must also fall.

With them must fall their regime of collaboration with the U.S.-Zionist axis that guarantees their power.

It will not be a moment too soon.