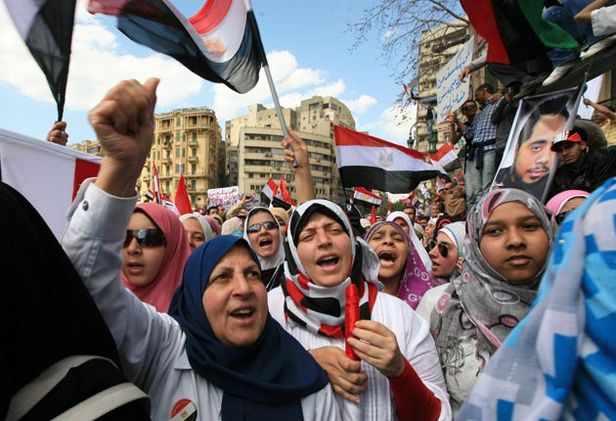 They are all strong, capable women defying the popular Western image of the oppressed, repressed, suppressed Muslim woman hidden behind a black chador or blue burqa, helplessly waiting for Western liberation.

The biggest challenge these women face is not dispelling Western stereotypes, but claiming their place in the Arab spring, not only during the revolutionary and transitional periods, but, most importantly, in the resulting new systems.

In Egypt, Aasma Mahfouz became known by many as the “Leader of the Revolution” after posting an online video calling young people to demonstrate en masse, helping to spark the revolution that forced President Hosni Mubarak’s resignation.

In Bahrain, political activist Munira Fakhro played a leading role as an organiser and spokesperson for the Pearl Square demonstrations, demanding government reform and building a movement that was “not Sunni, not Shia, but Bahraini”.

In Yemen, human rights activist and journalist Tawakul Karman has protested nonviolently outside Sana’a University every Tuesday since May 2007, demanding that President Ali Abdullah Saleh step down from power.

These women are not waiting for someone to come rescue them. They are active participants in their own liberation. They are leaders who provide vision, strategy, technological expertise, networks, logistics, determination, courage and sheer numbers.

In stark contrast to the image of Arab women in charge of nothing but their homes, these women are picketing outside supermarkets, staging sit-ins with their children, organising demonstrations, networking with each other, teaching workshops on the tactics of nonviolence, tearing down security fences and marching through checkpoints to connect with people on the other side.

They are not only pitching tents and serving tea, but also working as doctors and nurses, providing medical services to those wounded by police and military crackdowns on demonstrations. And over the past several months, they have been beaten, tear-gassed, shot, arrested, tortured, raped and killed by government forces.

Their issues are not just “women’s issues” but national issues. They are standing and working alongside men in their quest for greater levels of freedom, a voice in the government, an end to corruption and the right to jobs, a decent education and a better life, not only for themselves, but for everyone.

As we look at the Arab spring today, we must remember the lessons of Algeria and Kuwait. Although many courageous women risked their safety and gave their lives in the struggles for independence, once the conflict was over and independence declared, women were thanked for their contributions – and sent back home to leave the “real” work to the men. The ruling entities may have changed, but the patriarchal order remained intact.

Hints of history repeating itself are already apparent in Egypt where the “Council of Wise Men” was established to advise the transitional government, leaving women without a direct voice. Demonstrations in support of International Women’s Day in Cairo and calls for the protection of women’s rights under Tunisia’s Personal Status Code were interrupted by men telling women to “go back home where they belong”.

If we in the West are serious about supporting genuine democracy in the Arab world, we must help ensure that women are not treated as divorced from the critical interests of society. And we must all recognise the many roles that women already play in Arab society, far beyond the cherished roles of wife and mother. Western and Arab policymakers must make sure women are included in government and leadership positions and public life, not as tokens, but as equals.

Just as their sisters in Jordan, Bangladesh, Pakistan, Turkey, Indonesia and elsewhere have served as Prime Ministers, Presidents and Cabinet Members, so too must the women of the Arab spring take their places as public officials, leaders and contributors to the construction of their new and reformed regimes.

The inclusion or exclusion of women from the corridors of power and decision-making is, at heart, nothing less than a litmus test for the authenticity of any democracy. Women have already proven their determination to create change and work for reform through the tactics of nonviolence, even at the price of their own lives.

Will we take them seriously?

* Dr. Natana J. DeLong-Bas is Editor-in-Chief of The [Oxford] Encyclopedia of Islam and Women and co-author of Women in Muslim Family Law (with John L. Esposito). She teaches comparative theology at Boston College. This article was written for the Common Ground News Service (CGNews)