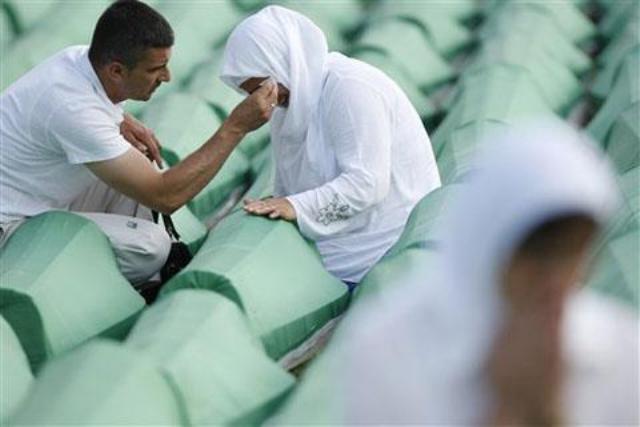 (June 14, 2011) – While visiting the Balkans over the last few days I had ample occasion to meditate on recent European history, the Muslim presence, current tensions and our future.

Returning to Sarajevo for a sixth visit was both moving and enjoyable.

Sixteen years after the end of the war the city is full of life; its citizens respond to their guests with dignity and respect, and expect nothing less in return.

They refuse to see themselves as victims; they aspire to autonomy and freedom.

Sarajevo stands as a symbol: hatred and repression cannot destroy men and women who hold firmly to their traditions, culture, faith and rights.

On the way to Srebrenica my convictions grew stronger and deeper.

A few days earlier, the torturer and mastermind of the Srebrenica genocide, Ratko Mladic, had been arrested and sent to the Hague to be judged by the International Criminal Tribunal for former Yugoslavia (ICTY).

Eventually, justice will be done.

While I was listening to a mother who lost her husband and two of her sons, coldly executed by the Serbian army along with more than 8,000 other men and boys on July 11, 1995, young Serbs drove by waving flags in protest against Mladic’s arrest.

Here, history seemed to have come to a standstill: the wounds and hatred of the past are still alive and painful.

So many memories, so many tears.

How sad I felt as I listened to that mother and others like her as they told of their personal ordeals with such wisdom and dignity.

Some families were totally destroyed; others lost up to eighteen members.

They came to Srebrenica, powerless and disarmed, trusting the United Nations and the so-called international community, only to be betrayed.

They heard the Serbs tell them that, as Muslims, they had either once been Christians whose ancestors betrayed their Christian roots or foreigners who were neither true Europeans nor genuine Bosnians, for Islam was a Turkish export not a European religion.

They heard the silence of the European Union, which after disarming them, in the name of a UN resolution, let them be massacred without raising a finger.

They are ready to forgive, and some have already forgiven.

But no one is going to forget.

Indeed, no one should ever forget.

European responsibility was critical, both concretely and symbolically.

Not only did the Dutch UN contingent not protect the unarmed civilian Bosnian Muslims but, six years before September 11 2001, the European countries, by their criminal inaction, conveyed the impression that they might have a problem in identifying with European Muslim populations.

The official institutions of Europe allowed a handful of racist Serbian leaders to behave as though Muslims were second-class citizens and not autonomous European peoples.

The year 1995 was a fateful watershed.

With the exception of the protection of the Kosovars in 1999, Muslims in Europe have since faced repeated controversies and crucial challenges.

The terrorist attacks in the United States (2001), in Madrid (2004) and London (2005), not to mention the cartoon controversy in Denmark (2005) have created an intellectual and psychological climate in which Islam is perceived as a religious, cultural and even a political problem in Europe and the West.

In this climate, Islam is considered as the religion of “the other”, as a faith alien to Europe.

The same climate is influencing debate on the integration of Turkey into Europe.

Can such a strongly Muslim country be a truly European one?

In their daily lives, Europe’s Muslim citizens are facing the same existential questions, even after three or four generations in their respective countries.

They may be European citizens, but they still have to prove it.

The emergence of populist and extreme right-wing political groups, whose visibility and influence are on the increase across the continent, only confirms the impression.

Islam and Muslims face adverse publicity; they feel unwelcome, strangers to the self-representation of the European majority.

As I write these lines, the image of the mother of Srebrenica returns to mind.

How sad she was, how powerless; but at the same time, how dignified, proud and determined.

As we remember the atrocity of Srebrenica, the growth of populist parties in Europe, and the rise of openly racist groups that target Muslims, comes as a wake-up call for every human being with a conscience, Muslim and non-Muslim alike.

Whatever the terms of rejection, whatever the attacks, populism and racism are dangers not just for the victims but for all of us.

It is high time for those who value dignity, freedom, justice and pluralism to work together and to resist the new plague of our time.

Time and again we must insist that rights, justice and dignity can never be given and must never be taken for granted.

They must be fought for; to protect and sustain them is a constant struggle.

Seen through the eyes of a Srebrenica mother, the lesson rings out loud and clear: hold fast to your dignity; never surrender your rights.

Such is our moral duty; such is the very substance of democracy.